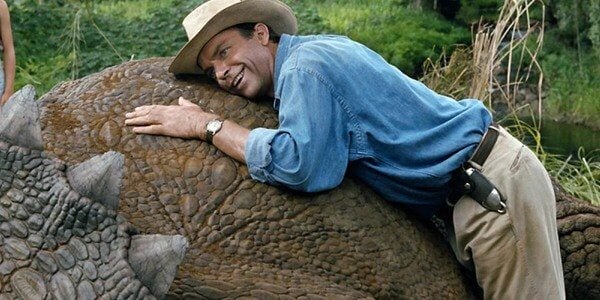 In a recent report from Cinemablend.com, Sam Neill spoke about the process of filming Jurassic World: Dominion:

It was somewhere between rehab, summer camp and Easter break. We were compulsorily in each other’s company and much richer for it. If we were shooting in L.A., we’d go off to our different caves every night, but we got to know each other so much better… Hopefully, there’ll be thousands of massive cinemas ready for it because it’s a big film for big audiences.

Neill compared filming to a “summer camp” which is hilarious and heartwarming, but the hopefulness in Neill’s words about theaters being ready for this large scale movie really hit home.

As far as Summer Camp this video posted by Sam Neill on his Instagram of him and Jeff Goldblum singing a duet in the “Lost Tapes” during the filming of Jurassic World: Dominion:

In which the brilliant #everlybrothers get a thoroughly undeserved shredding. Oh dear.

It is so awesome seeing Alan Grant and Ian Malcolm together again! We cannot wait to see Laura Dern’s character Ellie Sattler join the mix to recreate the magic of Jurassic Park.

As the pandemic continues into 2021 many movies are being released digitally or with a simultaneous digital and theatrical release. In the case of Disney, we have seen Pixar’s Soul released digitally for free on Disney+. However, Disney is gearing up to release their latest animated picture, Raya and the Last Dragon both in theaters and for an additional fee on Disney+.

Universal had an extremely successful digital release with Trolls World Tour back in 2020, for which viewers did purchase digital tickets. Jurassic World: Dominion was heavily delayed due to the pandemic and missed its initial release date of June 11, 2021. the film is now set to release in theaters on June 10, 2022.

We reported in November of last year that Universal and Cinemark struck a distribution deal that would potentially stop Universal from having a simultaneous digital and theatrical release of a movie:

You can see Universal’s entire movie release schedule here, which includes what is going directly to digital and what is still waiting for a theatrical release.

As far as Jurassic World: Dominion, we hope that by the time the summer of 2022 comes around we will be able to see this highly anticipated film in theaters.

Are you excited for Jurassic World: Dominion? Let us know in the comments!