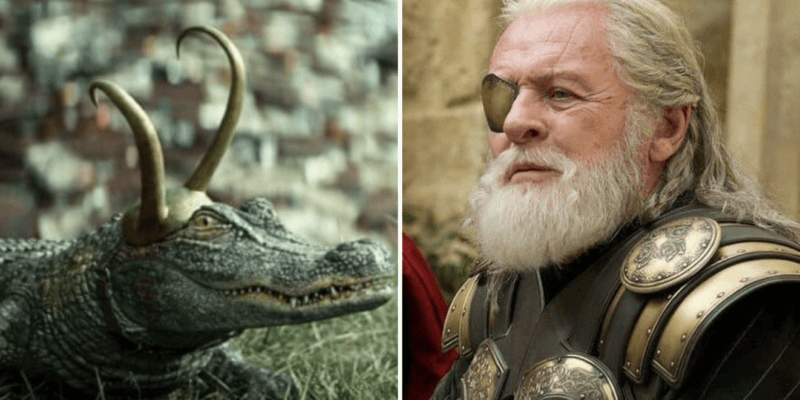 Iconic Hollywood actor Sir Anthony Hopkins (Silence of the Lambs, Hannibal, Armistad, The World’s Fastest Indian) was born on December 31, 1937, and began his acting career in 1960. Since then, he’s gone on to play iconic characters like Dr. Hannibal Lecter and King Lear — but, for Marvel fans, Hopkins will always be Thor (Chris Hemsworth) and Loki’s (Tom Hiddleston) father, Odin.

Now, hilariously, Hopkins has an unexpected connection to the Marvel Multiverse thanks to a recently resurfaced photograph from 2013. The Southeastern Reptile Rescue shared this photo [below] of Hopkins with a baby alligator in June 2013:

Anthony Hopkins with “Buck”, one of our American Alligators.

Anthony Hopkins with "Buck", one of our American Alligators.

Recently, the team behind Marvel Studios’ latest streaming series, Tom Hiddleston’s Loki, introduced a brand new Loki variant that has taken the internet by storm — Alligator Loki was an instant fan-favorite when he debuted in the epic post-credits scene after Episode 4 (“The Nexus Event”).

Alligator Loki — who is not a character from the Marvel Comics universe like Frog Thor — also played a major role in Episode 5 (“Journey Into Mystery”), prompting fans to give the popular new variant his own origin story.

This unintentionally hilarious photo of Anthony Hopkins could be viewed as the actor’s debut in the Multiverse — holding a baby version of his “son”, Alligator Loki, (not Crocodile Loki, as he has sometimes been called) in a timeline branch.

“It actually was funny because obviously he’s made [of] these three discarded cushions sewn up with some eyes on. And no offense to Alligator Loki — clearly the superior Loki — but you’d be doing a scene and you’d think OK, so we’re going to get the wide shot and then the two shot and we’ll do Owen [Wilson]’s coverage and get everyone’s close-ups and coverage and you’d think that felt like a great scene, I think we’re done, are we moving on? And we’d all sort of wrap…and somebody would say, ‘Hang on a second, we have to shoot the alligator.'”

What’s next for Alligator Loki?

With the first season of Loki set to conclude tomorrow, we’re not sure when we’ll see Alligator Loki — or Kid Loki (Jack Veal), or Classic Loki (Richard E. Grant), or Boastful Loki (DeObia Operai), or Hiddleston’s President Loki, for that matter — again.

What do you think about this hilarious photo of Anthony Hopkins and an infant “Alligator Loki”? Should it be part of Marvel Studios’ Sacred Timeline?