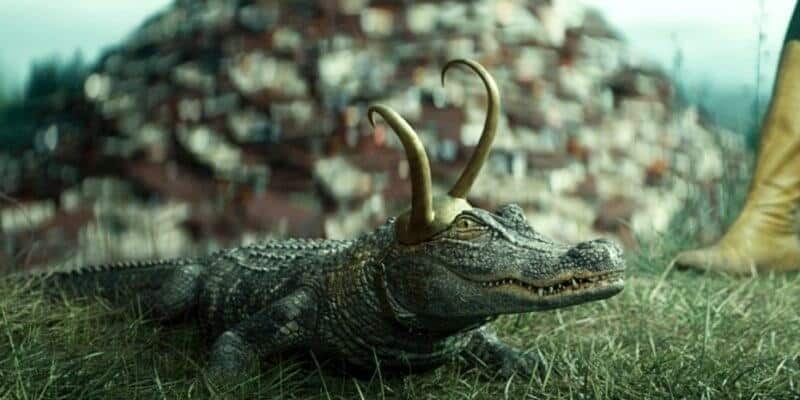 We were introduced to this Loki variant in the Episode 4 (“The Nexus Event”) post credits scene, which also featured Classic Loki (Richard E. Grant) and Kid Loki (Jack Veal). Alligator Loki showed up again in Loki‘s penultimate Season 1 episode, Episode 5 (“Journey Into Mystery”), and fans can’t get enough of the hilariously random character.

Now, one Marvel fan has created a much-needed origin story for this new character. Twitter user Keiid created a graphic novel-style backstory for Alligator Loki. Although the caption reads “Croki”, it has been pointed out by both fans and Loki team members that the reptile is, in fact, a gator, not a crocodile.

Nonetheless, this origin story artwork is going viral. It features Thor and Loki’s father Odin (Anthony Hopkins in the MCU), presumably from a timeline branch not on the Sacred Timeline, saying, “Son, I have kept this secret from you to protect you…you are adopted.” Then, Alligator Loki makes “confused alligator noises”.

The fan art explaining Loki’s origin has gone viral, with over 80,000 likes. While it is unknown if Keiid will expand on their graphic novel version of Alligator Loki’s origin, Loki head writer Michael Waldron — who has also been tapped to write the script for Marvel President Kevin Feige’s Star Wars movie — shared with Marvel.com:

“We were talking about [how] we want to meet many different versions of Loki in this show,” Waldron explained. “I was just like, there should be an Alligator Loki. And it’s like, well, why? Because he’s green.” He added, “It’s so stupid, but it also makes total sense … You almost have to take it seriously, like maybe he is [a Loki]? Why shouldn’t there be an alligator version of Loki? For all we know, that’s an alligator universe or whatever. It’s just the sort of irreverent thing that, in this show, we play straight and make the audience take it seriously.”

It’s worth noting that this isn’t the first time the Multiverse has featured an animal version of a popular character — although Alligator Loki was created for the Loki series, Frog Thor exists in Marvel Comics.

Even Loki director Kate Herron recently got in on the fun, sharing a behind-the-scenes photo of Alligator Loki without any CGI. She wrote:

Happy Episode Five “Journey into Mystery” @LokiOfficial day! Here is one the biggest divas and the most demanding actor I’ve ever had to work with, taking a break from his reign of terror to relax in his chair

Happy Episode Five “Journey into Mystery” @LokiOfficial day! Here is one the biggest divas and the most demanding actor I’ve ever had to work with, taking a break from his reign of terror to relax in his chair #alligatorloki #loki pic.twitter.com/3WH57yt0Bz

Do you want to see more Alligator Loki in the Marvel Universe?

Comments Off on Alligator Loki Gets an Origin Story, Delighting Fans