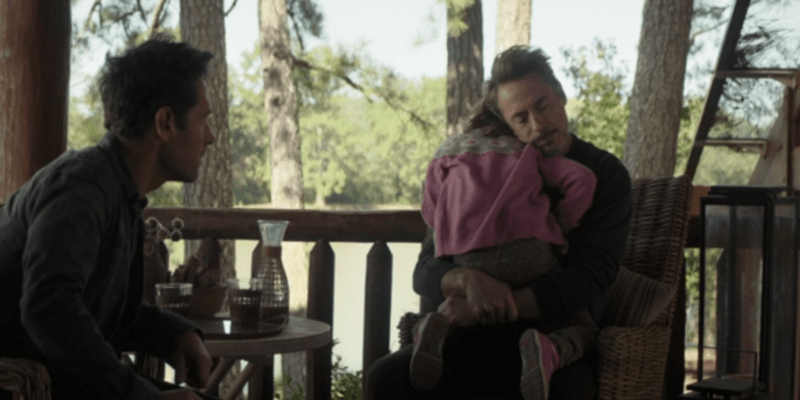 Just in time for Father’s Days, let’s take a look back at the Marvel Cinematic Universe and look at the best and worst dads in the MCU. There have been many, and it’s fair to say that it’s both a trope in the Marvel movies and Marvel Comics that many superheroes are driven by their daddy issues.

Tony Stark/Iron Man (Robert Downey Jr) had a lot to overcome to become one of the best Marvel dads in the MCU. His own father was neglectful and died when Tony was younger. Much of Tony’s character revolves around trying to prove himself to Howard, including taking over Stark Industries.

When Marvel Studios began the crazy adventure that would become the MCU back in Iron Man (2008), Tony had a surrogate father figure in Obadiah Stane (Jeff Bridges) who was an even worse example of a good dad than Howard. He even tried to kill Tony.

But by the time of Avengers: Endgame (2019) Tony has become a mentor to Peter Parker/Spider-Man (Tom Holland) and losing him to Thanos in Avengers: Infinity War (2018) made him willing to sacrifice everything to bring him back.

Every moment Tony Stark spends with his daughter Morgan Stark (Lexi Rabe) is precious and sweet. It shows how much Tony has grown since becoming Iron Man. And he loves her 3000.

If Tony is the reason there are so many villains in the Marvel universe then maybe the blame should actually fall on Howard Stark (John Slattery/Dominic Cooper). Howard was never around when Tony was growing up. He was neglectful and in the flashback created by the BARF in Captain America: Civil War (2016) shows he could be outright mean to his son.

In Iron Man 2 (2010), when Tony is being poisoned by his arc reactor he has to deal with Whiplash (Mickey Rourke) who is angry at how Howard treated his father. In the end, Tony finds a secret recording revealing a new element that saves his life. But couldn’t Howard have left such a big discovery in a more accessible location?

Is there another Marvel dad out there who is trying as hard as Scott Lang/Ant-Man (Paul Rudd)? He would do anything for his daughter Cassie, including learning close-up magic. Yes, he messed up and fell into a life of crime and spent some time in prison, but it was for a good cause.

He wants nothing more than to be with Cassie all the time. He stayed on house arrest and was monitored by FBI Agent Jimmy Woo (Randall Park) instead of running free with the rest of Team Cap after Captain America: Civil War (2016).

The whole reason Scott Lang even became Ant-Man was to try to find a way to get Cassie back in his life after prison. Hank Pym — a notable bad dad — manipulated him into helping him rob Pym Technologies.

Really, does Ego the Living Planet (Kurt Russel) need any explanation for why he is one of the worst dads in the Marvel Cinematic Universe? He fathered countless children and hired Yondu (Michael Rooker) and the Ravengers to bring them to him, all so he could see if they could help him take over the universe. When they couldn’t, he quickly killed them and started over again.

Ego took it a step farther in Guardians of the Galaxy Vol 2 (2017) after bringing Peter Quill/ Star-Lord (Chris Pratt) and the other guardians to his planet – body? – and discovered Peter has the celestial power he needs, he tries to take over Peter’s body.

He even admits that because he briefly had feelings for Peter’s mother Meredith (Laura Haddock) he gave her cancer. Peter grew up alone in space after Yondu decided not to take him to Ego. Yondu may have threatened to eat Peter more than once, but he was definitely a better father than Ego.

Clint Barton/Hawkeye (Jeremy Renner) is the most underrated dad in the MCU. People tease Clint for not being in the same league as the other Avengers, but the one movie he left them on their own half the universe was erased by Thanos (Josh Brolin).

Marvel Studios first reveals that the SHIELD agent is a father in Avengers: Age of Ultron (2015) when the Avengers go to the Barton family farm to recover after their loss. We do not see Clint’s family again until they are turned to dust. The grief over this turned Clint Barton into the murderous Ronin.

We will see him reunited with his kids again in his upcoming series on Disney+ Hawkeye where Jeremy Renner will return alongside Young Avenger Kate Bishop (Hailee Steinfeld).

Odin (Anthony Hopkins) did quite a number on his two sons Loki (Tom Hiddleston) and Thor (Chris Hemsworth). He lied to Loki about taking him from the Frost Giants but was never able to let his adoptive son’s race go. He was cold to the God of Mischief and pitted him against his brother for his affection. It was Loki’s issues with Odin that were a driving force into him becoming a villain.

The God of Thunder may revere his father, but to say they are close is simply not true. Odin kept many secrets from Thor and was constantly testing him to see if he would be worthy of his throne. It’s no wonder both Thor and Loki were closer with their mother Frigga (Renee Russo).

Not to mention he raised his first child, his daughter Hela (Cate Blanchett), to be a blood-thirsty killer. He used her to conquer the nine realms and build Asgard. But when he could not control her, he locked her in Hel.

Is there any father worse than Thanos? He is not just the Infinity Saga’s main antagonist and determined to wipe out half the universe, he also is the Marvel Universe’s worst father. He kidnaps children and calls them his “daughters” and pitted Gamora (Zoe Saldana) against her sister Nebula (Karen Gillen).

Every time Nebula lost, Thanos tortured and replaced one of her body parts with machinery. And though he cared for Gamora he was willing to throw her off a cliff for the Soul Stone in his quest for all the Infinity Stones.

He may have lost his own family and planet, but he’s inevitably the worst Marvel dad. But who knows, maybe there is someone just as bad coming in Marvel’s Phase 4.

Happy Father’s Day to all the dads out there who want to share the Marvel Universe with their kids. Perhaps you can spend Father’s Day doing a mini Marvel movie marathon and watch all the movies with all the best and worst dads.

Let us know in the comments your favorite Marvel dad!