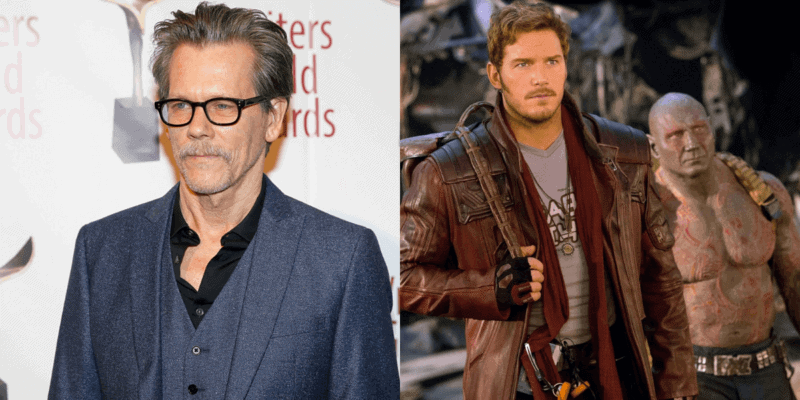 Actor Kevin Bacon has enjoyed a prolific Hollywood career, with iconic roles spanning a decades-long body of work. Now Bacon says he’d love to join the Marvel Cinematic Universe, specifically as part of Marvel’s Guardians of the Galaxy 3. With production slated to begin later in 2021 on Guardians of the Galaxy Vol. 3 (2023), and Bacon’s working relationship with director James Gunn, the actor’s interest in an MCU role may indeed come to fruition.

Kevin Bacon Reference in Guardians of the Galaxy (2014)

As Marvel fans know, Kevin Bacon already exists in the Marvel Cinematic Universe as an actor and star of Footloose (1984), favorite movie of Guardians‘ Star-Lord, Peter Quill (Chris Pratt). Kevin Bacon is directly referenced in Guardians of the Galaxy Vol. 1 (2014) when the gang’s resident Terran Peter Quill explains the plot of Footloose to Gamora (Zoe Saldana). In an interview with Esquire in promotion of his drama series Cop On a Hill, apparent MCU fan Kevin Bacon explains how delighted and surprised he was to be mentioned in the film, saying,

“When I saw Guardians of the Galaxy, I went to see it having no idea that I was discussed. It was an afternoon in New York, I was on 67th Street and went by myself, as I often do. I was like, ‘Holy ****! They’re talking about me. Are you guys getting this?’”

The memorable moment from the first Guardians of the Galaxy film was revisited in Avengers: Infinity War (2018) when Star-Lord asked Spider-Man (Tom Holland) if Footloose was “still the greatest movie in history.”

In this Marvel Cinematic Universe edition of “Six Degrees of Kevin Bacon,” there is actually another connection between the actor and Marvel’s Guardians of the Galaxy franchise. Bacon collaborated with the director of Guardians of the Galaxy, James Gunn in an original Rated R action/comedy superhero movie titled Super (2010).

When asked if he’d be game for reuniting with director James Gunn and joining the Marvel Cinematic Universe in an upcoming project like Guardians of the Galaxy 3, Kevin Bacon didn’t mince words, expressing his excitement at the prospect, stating,

“Listen, I love the idea. I would love to be part of that.”

Director James Gunn, responding to the news via his Twitter account, recounted his first encounter with Kevin Bacon — as a fan. Based on this exchange, it would appear Gunn is eager to reteam  with Bacon. Gunn Tweeted,

“I met Kevin as a very young man in New York City at a screening. “You’re my favorite actor,” I told him, “Along with Mr. Peter Falk.” He told me he took that as a very high compliment. Loved working with him on SUPER & can’t wait till we can work together again.”

I met Kevin as a very young man in New York City at a screening. “You’re my favorite actor,” I told him, “Along with Mr. Peter Falk.” He told me he took that as a very high compliment. Loved working with him on SUPER & can’t wait till we can work together again. https://t.co/iDvqPTDEN8

Marvel Studios’ Guardians of the Galaxy sequel will start filming this year, written and directed by James Gunn. Guardians of the Galaxy Vol. 3 was given an official release date of May 5, 2023, revealed in a recent Phase 4 sizzle reel from Marvel Studios. Marvel’s sizzle reel revealed a ton of exciting new footage from Black Widow (July 9, 2021) and Eternals (November 5, 2021), and new official release dates for films like Thor: Love and Thunder (May 6, 2022) and Black Panther: Wakanda Forever (July 8, 2022)

Drax actor Dave Bautista has said this will be the last time he portrays Drax in Guardians of the Galaxy franchise. While the actor loves the companionship with his cast, Dave Bautista says he’s eager to see the journey of Drax come to a close. Guardians of the Galaxy 3 from director James Gunn is expected to return Star-Lord (Chris Pratt), Gamora (Z0e Saldana), Drax (Bautista), Rocket Raccoon (Bradley Cooper), Groot (Vin Diesel), Nebula (Karen Gillan), and Mantis (Pom Klementieff) to the core cast, though very few details of the movie have been released or confirmed at this time.

Would you like to see Kevin Bacon in Guardians of the Galaxy 3? Let us know in the comments!