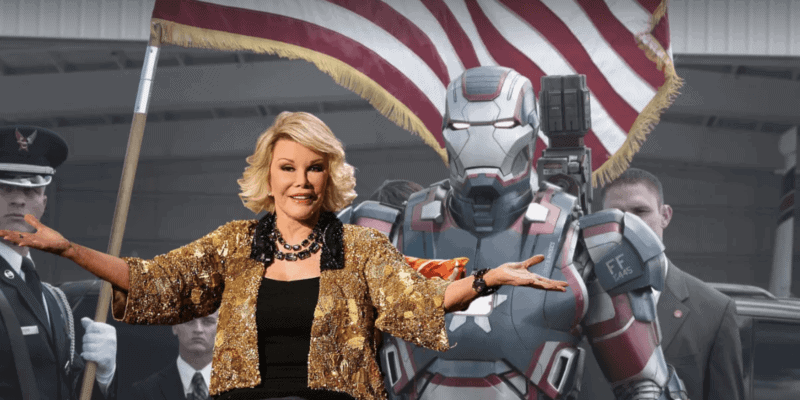 In a deleted scene from Iron Man 3 (2013), now available on Disney+, the late comedienne Joan Rivers hilariously roasted Iron Patriot. It’s one of several deleted scenes available in the Iron Man 3 “Extras” tab on the Disney+ app that add some additional reality and lightheartedness to the high fantasy, high stakes world of the MCU.

In the nearly 3-minute-long clip, the late Joan Rivers plays herself hosting a segment on her E! Network talk show Fashion Police, that ran in real life for seven seasons starting in 2010. The scene features the legendary comedienne doing what she did best — playfully eviscerating celebrities with well-crafted one-liners.

This time the celebrities on her hit list were Avengers, with the particular target of her punchlines being the newly minted Iron Patriot (Don Cheadle), formerly known as War Machine.

Joan started the segment in the Iron Man 3 deleted scene with some blue humor about the MCU’s Big Green, the Hulk (Mark Ruffalo)! Introducing Iron Patriot’s new look, she quipped, “Sometimes even superheroes get very insecure about their looks. I understand that any man would be kind of intimidated if you were showering next to the Hulk!”

Her show was entitled Fashion Police, after all, so Joan then set her sights on War Machine’s star-spangled rebrand, saying “…they gave him a whole new look, same suit but they painted it red, white, and blue. And they also renamed him ‘Iron Patriot,’ just in case the paint job was too subtle.”

Riffing on the idea of changing out his colors for every season, Joan wondered if his Iron Man armor would be painted “green for St. Patrick’s Day,” or “pink for Easter.” As Iron Man 3 is famously set during the holidays, Joan went on to say “It’s Hanukkah, let’s light some candles on top, paint him gold, and we can now call him: Iron Dreidel!”

Using some of her classic self-deprecating humor, Joan admitted, “I’m trying to love [his new look], because nobody appreciates cosmetic procedures more than I do! But the truth is, you know what he looks like? A float in a gay pride parade!”

Joan wrapped up the Iron Man 3 deleted scene saying, “The next time the government wants to do something like this, come to me for advice.”

Recently, the Marvel Cinematic Universe has enjoyed the ability to layer depth and grounded reality to characters who previously were overlooked in their cinematic appearances. In WandaVision, for instance, MCU audiences were treated to creative, postmodern storytelling via a deep dive into the psyche of the Scarlet Witch/Wanda Maximoff (Elizabeth Olsen) and her grief over the loss of Vision (Paul Bettany).

Currently, in The Falcon and The Winter Soldier, we are exploring the tortured past of Bucky Barnes (Sebastian Stan) and the post-blip reality of Sam Wilson (Anthony Mackie), while getting a new perspective on Captain America through the dark mirror version of Steve Rogers (Chris Evans) in John Walker (Wyatt Russell).

Disney+ also offers the ability to add depth to characters like Iron Man/Tony Stark (Robert Downey Jr.) with these deleted scenes and extras that make the world of the MCU even more believable and grounded in reality. And if it’s more humor you’re looking for, definitely check out the gag reels in ‘Extras’ tab for Marvel Studios blockbusters Avengers: Infinity War (2018) and Avengers: Endgame (2019) featuring some amazing outtakes of Iron Man, Tony Stark and Doctor Strange (Benedict Cumberbatch), as well as some can’t miss riffs from Captain America and “Bro” Thor (Chris Hemsworth). There’s a particularly funny deleted scene of Black Panther (the late Chadwick Boseman) being interrupted by a goat that’s not to be missed.

What do you think of Joan’s jokes? Which one made you LOL? Let us know in the comments!