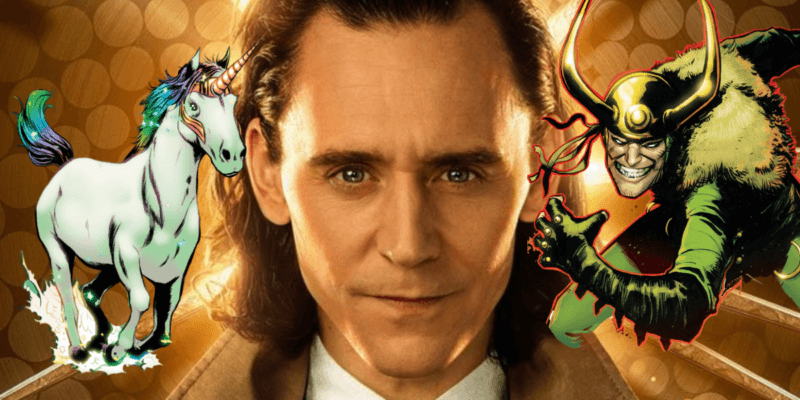 The first season of Loki is over and fans are suffering withdrawal from their favorite trickster god and all the crazy variants that the Marvel Studios original series brought to the MCU.

For those who are wondering if they could ever top Alligator Loki in Season 2, do not fear. Marvel has barely scratched the surface of the versions of Loki from the comic books.

Loki Season 1 brought us many great variants of the God of Mischief beyond Tom Hiddleston’s Loki, who is, in fact, a variant of the mercurial villain who escaped death at the hands of Thanos in Avengers: Infinity War (2018). He took advantage of Tony Stark AKA Iron Man’s (Robert Downing Jr.) mistake during the Time Heist in Avengers: Endgame (2019) by running off with the Tesseract/Space Stone.

Then, of course, there was Sylvie, Loki’s version of Lady Loki played by Sophia di Martino. Her dynamic with our Loki was the central part of the story as Loki learned to love himself by learning to love her. But when Loki and Sylvie ended up at the void at the end of time, they met a whole new league of variants.

This included Classic Loki (Richard E. Grant) who sacrificed himself to get them to the Citadel at the End of Time and confront He Who Remains (Jonathon Majors). They even met Kid Loki (Jack Veal) who killed his Thor, President Loki (Tom Hiddleston), and Boastful Loki (DeObia Oparei), who betray them.

But who can forget the most fabulous of all – Alligator Loki, the variant that launched a thousand memes. So, how can they possibly top all that multiverse madness with new variants when Season 2 returns to Disney+ possibly in Fall 2022?

We saw King Loki in the Loki Season 1 trailer, but he was ultimately cut for time. Clearly, Director Kate Herron and head writer Michael Waldron were considering adding King Loki. Or he could have been an unsuccessful attempt at a misdirect to try to stop internet theorists from figuring out that a variant of Kang was behind the Time Variance Authority (TVA).

King Loki is a version of the Frost Giant from the comics who got his greatest wish and killed Thor and became the King of Asgard. After his death, he tried to take over Kid Loki’s body. He Who Remains tempted the titular character with a throne in the final episode and even though Loki has changed after falling in love with Sylvie, there is definitely a version of him who would have taken the deal.

If there is any version of Loki from Marvel Comics that can capture the hearts of minds of the fanbase like Alligator Loki it would have to be Unicorn Loki. Though Loki only appeared as a unicorn very briefly, no one can deny his glory.

Loki has used his shape-shifting ability to change into various animals like a wolf, a snake, and even a mare. These forms are all rooted in Loki’s mythological origins. In Norse mythology, the gender-fluid Loki gave birth to the eight-legged horse Sleipnir, the world serpent Jörmungand, and Fenrir the wolf, who appeared as Hela’s (Cate Blanchett) pet in Thor: Ragnarok (2017).

But no other animal variant of Loki can ever compare to the unicorn.

Recently in Marvel Comics, Loki took over as Sorcerer Supreme. After winning a magic tournament, the Vishanti declare that Loki is the new Sorcerer Supreme, leaving Doctor Strange almost powerless and working as a veterinarian.

Though it only lasted five issues of Doctor Strange, it was not the only time that Loki took over for another powerful magical user in the Marvel Universe. In Mighty Avengers #21, Lady Loki used her power to impersonate Scarlet Witch and was able to mimic her abilities enough to trick everyone but her son Billy Kaplan AKA Wiccan.

The Hollywood Reporter has reported that Tom Hiddleston could be reprising his role as the God of Mischief in Doctor Strange in the Multiverse of Madness on March 25, 2022. In all the chaos of that Marvel film perhaps Loki could learn some new magic from Doctor Strange (Benedict Cumberbatch).

Loki, God Of Heroism And Truth

It’s about time Marvel Studios gave fans a truly good variant of Loki. Season 1 of Loki was about Loki learning to overcome his darker side. He still has a long way to go but while Loki met some of the worst versions of himself and learned he did not need to be that way.

The next step would be for the God of Mischief to meet the God of Heroism and show him all the best version of himself. After Sylvie’s betrayal, Loki will need some inspiration to help take on Kang and Judge Ravonna Renslayer (Gugu Mbatha-Raw).

This could lead Loki to finally become worthy of his own weapon, not Thor’s hammer Mjolnir that Loki may have always longed for. In Marvel Comics, Odin had a weapon in armory set aside just for Loki called Gram, the sword of Truth, which was referenced in Season 1 with Loki’s flaming sword.

Let us know in the comments below what you think about these variants coming in Loki season 2.