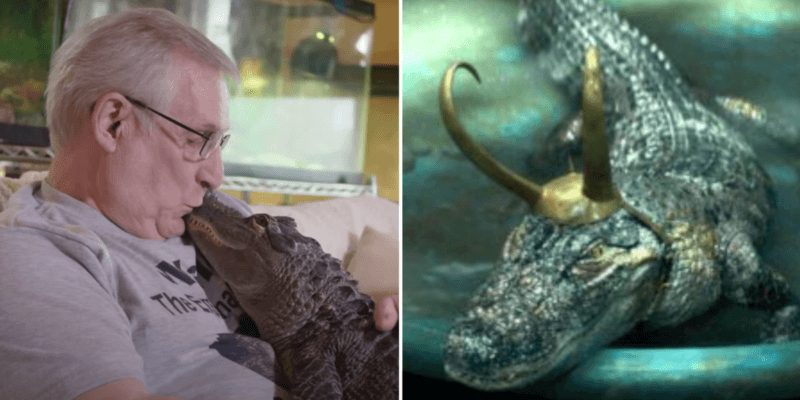 If there’s one show on every Marvel fan’s minds right now, it’s Loki. Debuting June 9 on Disney+, the new Marvel television series follows Tom Hiddleston’s God of Mischief as he hops around the Sacred Timeline in an attempt to stop a plot to destroy the Marvel Universe as we know it.

Loki is dramatic in every sense of the word, but perhaps what is most shocking is that included in the line-up of various Loki Variants is an Alligator Loki. And that Variant just happens to be inspired by a very specific real-life animal.

Created by Michael Waldron, who also serves as the head writer, and directed by Kate Herron, Loki serves as the third installment in Marvel Studios’ television series releases. Following WandaVision and The Falcon and the Winter Soldier, Loki sees the return of Hiddleston’s trickster god in an action-packed adventure traversing the Multiverse as we’ve never seen before.

Thor’s brother — who was memorably killed by Thanos (Josh Brolin) in Avengers: Infinity War (2018) — is joined by a new cast of characters like Owen Wilson’s Mobius, Gugu Mbatha-Raw’s Ravonna Renslayer, and Sophia Di Martino‘s Lady Loki, Sylvie, all set against the unnerving backdrop of the Time Variance Authority (TVA).

The first episode of the new Marvel series smashed television records and due to its opening popularity caused a huge shift for Disney+ — the streamer responded to the Loki love by moving all future Original projects from Friday releases to Wednesday.

Spoilers ahead for Loki Episode 5, “Journey Into Mystery”

Last week’s episode (Episode 5, “Journey Into Mystery”) followed on from the surprisingly tragic events of the previous episode (Episode 4, “The Nexus Event”) — the ending of which caused concern for Marvel when it was first pitched. The fifth episode found the titular character in an unfamiliar place surrounded by many new Loki Variants, including Classic Loki (Richard E. Grant), Kid Loki (Jack Veal), Boastful Loki (DeObia Oparei), and perhaps most amusingly, Alligator Loki.

Alligator Loki has quickly gone on to become a fan-favorite character from the television series — even inspiring an interesting origin story. While this character is not inspired by a pre-existing Marvel Comics character as revealed by Waldron to Marvel.com, Alligator Loki does in fact have some rather unusual links to the real world.

Sharing to his Twitter,  Eric Martin — the scribe behind the game-changing “The Nexus Event” — revealed the source of Alligator Loki’s look.

While #AlligatorLoki is wholly a creation of @michaelwaldron’s weird mind, we did have a real world visual reference for him. Meet Wally:

While #AlligatorLoki is wholly a creation of @michaelwaldron’s weird mind, we did have a real world visual reference for him. Meet Wally: https://t.co/W012OlwtEU

Martin reveals that an emotional support alligator was used as a visual reference for the new Loki Variant. Wally the gator was originally rescued from Orlando, Florida, and is now the federally licensed support animal for his owner, Joie Henney. Wally is a five-feet long alligator that lives with Henney and the rest of his reptilian pets. In Henney’s own words, Wally is “far from typical” and “loves cuddling”. You can watch the full video here:

What is interesting here is that even a huge studio like Marvel can take such human-centered experiences and include them in some way in their superhero blockbusters. With the episode left on a cliffhanger following Loki’s and Sylvie’s battle with Alioth — and more major hints towards Kang the Conqueror’s arrival in the new series — it is not known what will happen to the rest of the Loki Variants but there is sure to be fan outcry if Alligator Loki’s time is up in the Marvel Cinematic Universe.

Marvel’s Loki also made history when Herron chose to include Loki’s bisexuality in the series, making the character’s sexuality canon after 10 years of the Asgardian god being in the MCU. The eyes of the Marvel fandom are sure to be watching the finale with eagerness to see how this popular television show propels the MCU into new territory.

Fans will get their next look at the mysterious Multiverse next year in Kevin Feige’s Marvel Studios production of Doctor Strange in the Multiverse of Madness (2022). And if you can’t wait for more Marvel action, Black Widow (2021) is in theaters and streaming now!

What do you think of Alligator Loki’s inspiration? Let us know in the comments!