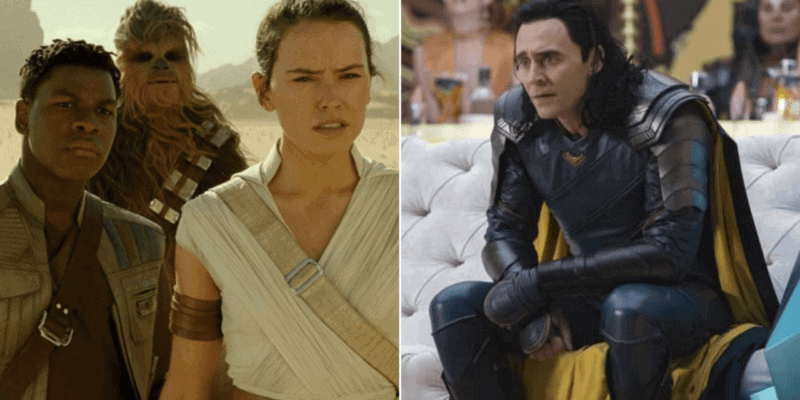 Loki, Marvel Studios’ third foray into television after WandaVision and The Falcon and the Winter Soldier, was a smashing success by almost all counts. The Marvel Cinematic Universe show even debuted to such high numbers that it convinced Disney executives to move the standard Disney+ Original new episode drop day from Fridays to Wednesdays.

As good as Loki’s six-episode run into the Marvel Multiverse was, though, there might be some room for improvement in one specific area as Season 2 production gets underway. The series — led by Avengers and Thor franchise star Tom Hiddleston (Loki) and Owen Wilson (TVA Agent Mobius M. Mobius) — fell into a trap that Star Wars fans know all too well, as it absolutely plagued the incredibly divisive sequel trilogy.

For now, Marvel fans have a lot more love for Hiddleston’s Loki — and Sylvie/Lady Loki (Sophia di Martino), Kid Loki (Jack Veal), Classic Loki (Richard E. Grant), and Alligator Loki…you get the idea — than Star Wars fans do for nearly any of the characters in Episode VII – The Force Awakens (2015), Episode VIII – The Last Jedi (2017), or Episode IX – The Rise of Skywalker (2019).

Nonetheless, the two projects do share a commonality — they require viewers to do background work to get the full story, which can be problematic, particularly for those who may not be familiar with the intricacies of either the Marvel or Star Wars canons.

In the case of Loki, numerous Marvel.com interviews with the cast and crew have surfaced since the Season 1 finale episode (“For All Time. Always.”) — all of them containing pertinent information that would have been helpful to have during the first season of the MCU series — particularly for those who aren’t familiar with Marvel comics.

Each of Marvel’s Loki articles reveals details that were completely absent from the episodes themselves. Considering the timing of their publication, it’s almost like the studio is using its own blog to fill in some important blind spots the show couldn’t cover. It’s a bit like Marvel giving fans extra homework after the episode is over if they want to truly understand what happened.

A key example of this is an interview in which Gugu Mbatha-Raw (Judge Ravonna Renslayer) shares how her character felt when she escaped from the Time Variance Authority headquarters at the end of the Season 1 finale. Mbatha-Raw shared, “She’s [thinking], ‘Peace out. Bye. Free will!’”

Loki head writer Michael Waldron — also the writer for Marvel President Kevin Feige’s upcoming Star Wars movie — also spoke about Judge Renslayer, saying she “wants to [find] who pulled the wool over her eyes. That’s what she’s going to go out in search of.”

Without reading this particular interview, one would never know this is precisely what was going on — while it’s implied in the scene Renslayer shares with Agent Mobius, her purpose in leaving the TVA isn’t explicitly stated and would have been helpful to know.

Another issue is raised in a different Marvel blog post. He Who Remains (Jonathan Majors) is not Kang the Conqueror, but, it seems the statue in the non-Sacred Timeline version of the TVA headquarters Loki visits in the final scene of Episode 6 is.

Again, this could be assumed by Marvel fans, but not by newcomers to the fandom — and, either way, would have added context if it had been clearly shared in the installment:

Mortified, Loki looks to the Time Keepers statue area and finds the statues are no longer there. In its place is a single statue of the face of the man he just met at the end of time in a futuristic suit— the variant He Who Remains warned them about—Kang.

The Star Wars sequels also required additional reading — in the form of novels or the “The Art of Star Wars” series — to fully understand what was happening or, in some cases, to grasp what was going on whatsoever (but that’s another article).

The Rise of Skywalker: Expanded Edition infamously confirmed that Rey’s father wasn’t technically Palpatine’s son; he was a defective Palpatine clone. The same book also confirmed once and for all that Finn is force sensitive. Here’s the passage from the book:

The moment Rey [Daisy Ridley] came back to herself, Finn knew. He launched himself out of the turret seat – no one was pursuing them anyway — climbed the ladder and sprinted for the cockpit. “Chewie, I felt her!”

We could talk all night about the myriad ways many fans — and Finn actor John Boyega himself, in fact — feel that the character was let down by Lucasfilm President Kathleen Kennedy and sequel directors JJ Abrams and Rian Johnson.

But, the fact of the matter is, there was more to the ex-stormtrooper’s story in the sequel trilogy’s supplemental materials — knowing Finn was Force-sensitive would have seriously altered how he was viewed throughout the three films.

Williams returned to conclude the Skywalker Saga in The Rise of Skywalker, spending some time with new character Jannah (Naomi Ackie) at the end of the film.

Almost immediately after the movie debuted in 2019, fans began speculating that she is actually the Socorro-born pilot’s daughter. As it turns out, this rumor is bolstered — and some believe even confirmed — by the “Star Wars: The Rise of Skywalker – The Visual Dictionary” movie companion book.

Calrissian did not then go easily into a quiet retirement. When peace reigned, he attempted to start a family, but tragedy struck and his infant daughter vanished. It was only later that it became clear who the culprits behind the abduction were: the First Order, building their fighting forces but also specifically striking at the old Alliance leadership.”

This fits Jannah’s story that she was taken by the First Order in early childhood.

Without reading this text, fans are left to create theories on their own, even though the answers to many sequel trilogy questions — like how Jedi Master Luke Skywalker (Mark Hamill) even ended up on Ahch-To in the first place or how Kylo Ren/Ben Solo (Adam Driver) really decided to join forces with Supreme Leader Snoke — are actually out there.

As Hiddleston’s Loki moves forward into its second season, it is essential for it to avoid tumbling further into the trap that the Star Wars sequels did. While supplemental materials are nice for superfans, basic, crucial information must be included in the story for it to reach its full potential.

What do you think? Can the Loki series avoid the divisive nature of the Star Wars sequel trilogy in Season 2?