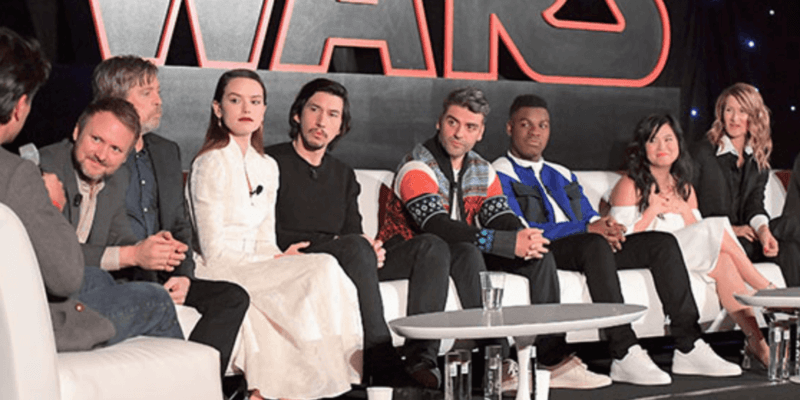 Despite the divisive nature of the Star Wars sequel trilogy among the Star Wars fan community– particularly Rian Johnson’s 2017 Skywalker Saga installment, Star Wars: Episode VIII – The Last Jedi — it certainly seems that the cast had a great deal of fun on set.

Previously, Johnson shared the “most cursed image of all time”, a photo of him and Daisy Ridley (Rey) after they used a face swap app. Now, Kelly Marie Tran (Rose Tico) — who has been vocal about the challenges she faced after receiving backlash for her Star Wars role — has shared another hilarious behind-the-scenes story from The Last Jedi set.

In an interview with Looper, the Raya and the Last Dragon actress said:

“I hope that I don’t get in trouble for sharing this, but I think that Rian will be OK with it. Some of my favorite memories of being on The Last Jedi set was that Pokémon GO just came out and we were all so involved in it. We’d get in trouble because we’d have our phones out. And on a Star Wars set, you’re not supposed to have your phones out because everyone’s afraid that photos [of the set] will go everywhere. And I was like, ‘Dude, I’m just trying to catch a Weedle.'”

Tran went on to share how she and British actor John Boyega (Steve McQueen’s Small Axe, They Cloned Tyrone, Attack the Block) once pranked Johnson using, of all things, Pikachu! She said:

“One day I played a prank on Rian because we were all really excited to catch a Pikachu. So I drew a Pikachu outside in chalk, and John Boyega and I, we were about to do a take, and I was like, ‘Rian, there’s a Pikachu outside! You have to go outside!’ And we stopped the entire set. I’m going to get in trouble. I don’t know how much money we wasted doing this. But Rian went outside to look for Pikachu.”

Related: Should Ezra Bridger Be the Catalyst to Scrap the ‘Star Wars’ Sequels?

Johnson’s Star Wars trilogy, which was previously thought to be scrapped after it was not mentioned during Lucasfilm’s 2020 Disney Investor Day presentation, is reportedly still in the works, so this may not be the last we see of the Knives Out (2019) and Knives Out 2 director in the Star Wars universe.

Previously, an unconfirmed leaked plot for Johnson’s trilogy suggested that “broom boy” and Rey would play a major role in the upcoming trio of films. However, since Daisy Ridley, Oscar Isaac (Poe Dameron), and John Boyega (Finn) have all indicated they have no immediate plans to return to the Star Wars franchise, it is likely that the movies will take another direction.

As for the original trilogy cast members who appeared in the sequel trilogy, Harrison Ford (Han Solo) is currently filming Indiana Jones 5, Mark Hamill (Jedi Knight Luke Skywalker) is still involved in Star Wars — he even made a cameo appearance in The Mandalorian Season 2 finale episode –, and the late Carrie Fisher (Princess General Leia Organa) tragically passed away in 2016.

More on The Last Jedi

You can currently catch the entire Skywalker Saga — including the battle to defeat Kylo Ren (Adam Driver) and Supreme Leader Snoke in Episode VII – The Force Awakens (2015), The Last Jedi, and Episode IX – The Rise of Skywalker (2019) — on Disney+. The official description reads:

In Lucasfilm’s Star Wars: The Last Jedi, the Skywalker saga continues as the heroes of Star Wars: The Force Awakens join the galactic legends in an epic adventure that unlocks new mysteries of the Force and shocking revelations about the past.

Do you like the Star Wars sequel films? Would you like to see another Star Wars movie by director Rian Johnson?