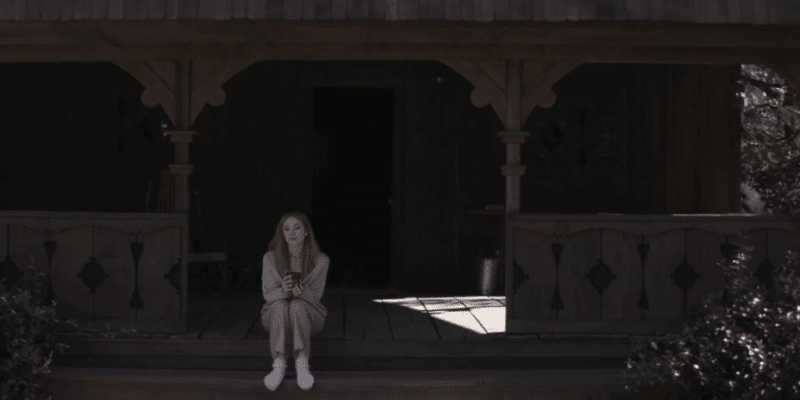 When WandaVision first began airing on Disney+ in February 2021, the ode to classic sitcom television was like nothing Marvel fans had ever seen. The nine-episode mini-series starred MCU Avengers franchise alums Elizabeth Olsen (Scarlet Witch/Wanda Maximoff) and Paul Bettany (Vision) after Avengers: Endgame (2019).

As it turned out, in her grief over Vision’s death in Avengers: Infinity War (2018), Wanda had inadvertently used chaos magic to trap the citizens of Westview, New Jersey in her “Hex” — a world in which she, Vision, and their two sons Billy and Tommy, lived idealized suburban lives.

The final episode of WandaVision saw Wanda finally let go of her family, freeing the people of Westview — and leaving breakout star Agatha Harkness (Kathryn Hahn) in the town square, but she’ll probably find her way back to the Marvel Cinematic Universe…

Episode 9’s post credits scene featured Wanda in a remote cabin, presumably on Wundagore Mountain. Now, Disney+ has updated the scene in a seemingly benign way — but it could actually be a major change.

As ComicBook.com pointed out:

The theories on this one are endless. To start with, it might be a meaningless update. It’s very strange to imagine that Disney+ re-uploaded a new version of WandaVision’s final episode to include this small change for no reason, if it is indeed an intentional change. For the sake of speculation, it would seem Doctor Strange could be making his way to Wanda’s cabin in this new version, as the character was originally intended for an appearance in the series…

Furthermore, it’s possible that the change was made now that Marvel fans have met Sylvie (Sophia di Martino) in Tom Hiddleston’s Loki series, which is currently airing on Disney+. Since we know Sylvie has been doing everything in her power to cause problems with the Sacred Timeline, Marvel Studios could be pointing to her in the WandaVision post credits scene now.

Again, there is no confirmation about why this change occurred, but it does seem odd that Disney would go to the trouble to change WandaVision‘s final scene if there was no significance to it.

Twitter user Phase Zero shared a video of the new post credits scene, which you can view below:

Do you think the change to the post credits scene in WandaVision is significant?

Comments Off on ‘WandaVision’ Now Has a Different Post Credits Scene