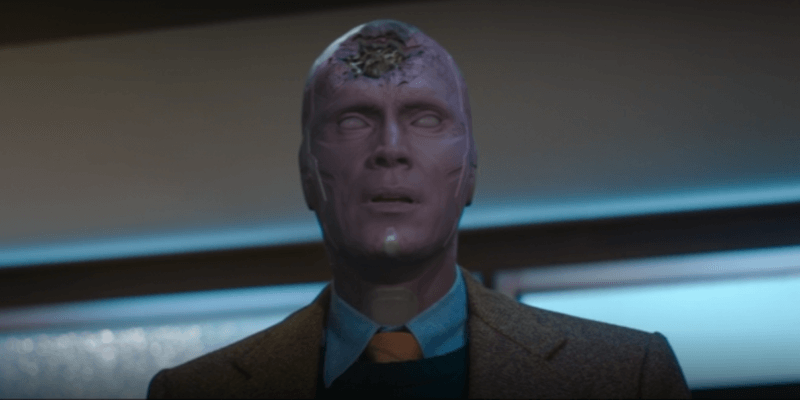 WandaVision has taken the world by storm, but there is only one episode left in its historic run. It is the first Disney+ exclusive show for Marvel and follows the success of Star Wars‘ The Mandalorian. It stars former Avengers Wanda Maximoff / Scarlet Witch (Elizabeth Olsen) and Vision (Paul Bettany).

The show began after Vision’s death at the hands of Thanos in Avengers: Infinity War (2018) and Wanda’s return after the five-year Blip in Avengers: Endgame (2019). Vision is somehow alive, but they are seemingly trapped in a reality-warping “Hex”, living idealized suburban lives based on classic television sitcoms. And so, the mystery began.

With Vision walking around, smiling, and laughing with Wanda in WandaVision, one of the biggest questions of the TV series has been, “How that could even be possible?” Was Wanda acting as a puppeteer, seemingly reviving his dead body in a macabre allusion to Weekend at Bernies (1989)? Or, did she pull him in from another universe where he was still alive?

Here is what we know for certain that has happened to Vision since his demise. In Endgame, he knew that Thanos would be able to wipe out half of the life in the universe if he got his hands on all the Infinity Stones, which included the Mind Stone located in Vision’s head. So, he begged Wanda to kill him to save the universe, which she did, only to have Thanos rewind time, steal the stone anyway, and kill Vision again.

During the five-year Blip, there is a lot of time unaccounted for and not much is known about what happened to Vision’s body. After Endgame, Wanda sought out Vision’s body. She found it in SWORD headquarters, where Director Tyler Hayward (Josh Stamberg) was dissecting it.

This scene in WandaVision was a visual reference to a similar moment in the comic book “West Coast Avengers Vol. 2 #43”, where the same thing happens. It is part of the Vision Quest storyline — when Wanda tries to rescue The Vision, she finds him torn apart.

Comicbook.com has raised the question of how SWORD got custody of Vision’s body before the events of WandaVision. Did the surviving Avengers just abandon it after the battle in Infinity War? The answer is, of course, no.

Steve Rogers / Captain America (Chris Evans) and Tony Stark / Iron Man (Robert Downey Jr.) did not just leave their friend dead in Wakanda and let anyone recover him. Not even Hawkeye / Clint Barton (Jeremy Renner) would have allowed that to happen.

Hayward specifically says in episode eight of WandaVision (“Previously On”), that in accordance with the Sokovia Accords, SWORD had the legal and moral obligation to take Vision’s body. He also previously mentioned that it was a stipulation of Vision’s will that his body not fall into the hands of someone who use him as a weapon.

Although it is clear now that Hayward is not honoring his will.

Wanda was able to find Vision’s body without using her chaos magic. So, obviously the fact that SWORD had possession of his body was not unknown to the larger Marvel Cinematic Universe. Whether any of the Avengers tried to fight SWORD is up for debate. Perhaps they tried to stop SWORD and Hayward from taking Vision, but it might have been fruitless if SWORD had a legal claim to the body.

Now that Marvel has shown us that in her moment of utter loss, Wanda was able to create a new version of Vision, the question becomes what exactly is the version of Vision that is inside the “Hex” with Wanda? Could it be a crystalline possession like the fake Pietro that Agatha created?

While this revelation does assuage the notion that Wanda has been deluding herself using Vision’s corpse, it raises more questions still. Vision acts independently suggesting that he is something unique from what Pietro is. Agatha controls everything the version played by Evan Peters did. Vision questions everything, and he does not have any of the memories from before Wanda created him.

Another question that has been bothering me, personally, is that it was established that Wanda can only reshape matter. When Monica Rambeau (Teyonah Parris) was dressed as Geraldine, her clothes were still made of the Kevlar that she was wearing when she entered the “Hex”.

Later FBI Agent Jimmy Woo (Randall Park), Darcy Lewis (Kat Dennings), and Monica discover that Hayward is able to track Vision inside because he still is made of vibranium, despite the fact that all the vibranium Vision was made from seemingly remained outside of the “Hex”.

In the post-credits scene from episode eight, a new all-white version of Vision was revealed to be under Hayward’s control. He clearly still had all the vibranium that was needed in order to reconstruct him. Originally, this white Vision had its roots in the “West Coast Avengers” comic book story line in which the characer was dissembled. In that story arc, when Hank Pym put him back together, he lost all of his personality.

Rumors have now been circulating — though completely unconfirmed — that there will be another surprise cameo for the final episode of WandaVision. Reports indicate the actor could be James Spader. If Spader were to voice Hayward’s version of Vision it could be a sign of the return of Avengers’ villain, Ultron, since Spader voiced the character in Age of Ultron (2015). Though, this does seem highly unlikely.

Either way, WandaVision is setting up for an explosive finale. I am excited for the showdowns between Wanda and Agatha, Vision and White-Vision, and Monica and Hayward. I am also sad to see the show go, but at least Falcon and the Winter Soldier is following right behind it.