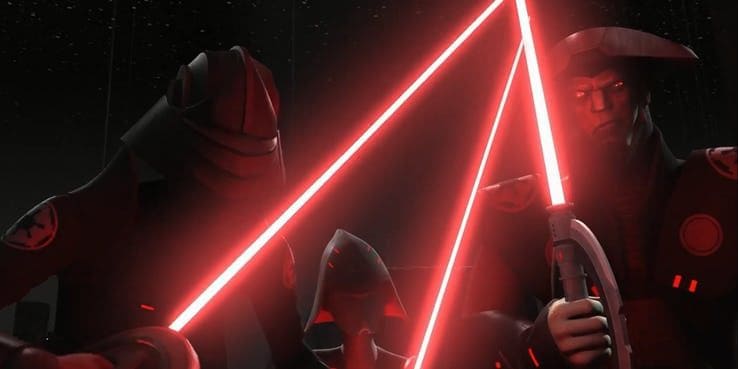 At this point, it’s practically a foregone conclusion that the Inquisitorius will be making their live-action debut in the upcoming Star Wars show, Obi-Wan Kenobi.

The show will be primarily set on Tatooine during Ben Kenobi’s self-imposed exile on the desert planet.

This means that Anakin Skywalker is well and truly the Dark Lord of the Sith by this point, and his Inquisitors — originally seen in Dave Filoni’s animated series Star Wars Rebels — are entrenched in their quest to do Vader’s handiwork and rid the Star Wars galaxy of any Jedi Knight who managed to escape Darth Sidious/Emperor Palpatine’s Order 66.

Now, it seems that we have details about which villain one Star Wars newcomer will play in the Kenobi series. A new report suggests that Sung Kang — best known as Han in the Fast and the Furious franchise — will be playing the Inquisitor known as Fifth Brother.

Although Kang’s role in Obi-Wan Kenobi hasn’t been confirmed by Disney or Lucasfilm at this time, this seems a likely role for the actor to take on.

ComicBook.com recently noted how Fifth Brother could fit into the Obi-Wan Kenobi story:

Fifth Brother debuted in the second season of Star Wars Rebels, voiced by Philip Anthony-Rodriguez. He and Seventh Sister continued the hunt for the Ghost crew Jedi Kanan Jarrus and Ezra Bridger after the Grand Inquisitor’s death. Like the other Inquisitors, Darth Vader trained Fifth Brother, and that training cost Fifth Brother his hand. Fifth Brother met his fate in Malachor when Ahsoka Tano and Maul briefly joined forces to fight against him.

Although Ahsoka Tano (Ashley Eckstein) and Darth Maul (Ray Park) ultimately killed Fifth Brother, Obi-Wan Kenobi is set before Rebels in the Star Wars timeline, meaning he could absolutely appear. Park has also teased Maul’s return in the series, so it is possible that we’ll discover the two characters had an encounter before their showdown in Rebels.

Kang recently spoke to Rotten Tomatoes about making his debut in the Star Wars universe, sharing his excitement for the opportunity:

“The feeling that I get on set is every single crew member, you look in their eyes, and it’s like a kid going ‘I grew up watching Star Wars. Like, this is my dream to be here, to see one of the Star Wars characters, or the Darth Vader character or, you know, one of the Jedis walking around. No matter how old they are, it’s guys that do my makeup and stuff, and people who do the costumes, and all the set designers. There’s this feeling of legacy and it’s like everyone talks about history and why they feel so blessed to be here.”

In addition to the potential of seeing Star Wars Rebels characters in Obi-Wan Kenobi, Jon Favreau and Dave Filoni are set to introduce more of the Ghost ship crew in The Mandalorian saga. Grand Admiral Thrawn is set to make his live-action debut soon and Jedi Ezra Bridger — rumored to be played by Aladdin (2019) star Mena Massoud — is likely to show up in Mandalorian spinoff, Ahsoka.

Are you excited to see more Rebels characters come to life in Star Wars live-action series?

Comments Off on Move Over Thrawn, ANOTHER ‘Rebels’ Villain Is Coming in Live-Action