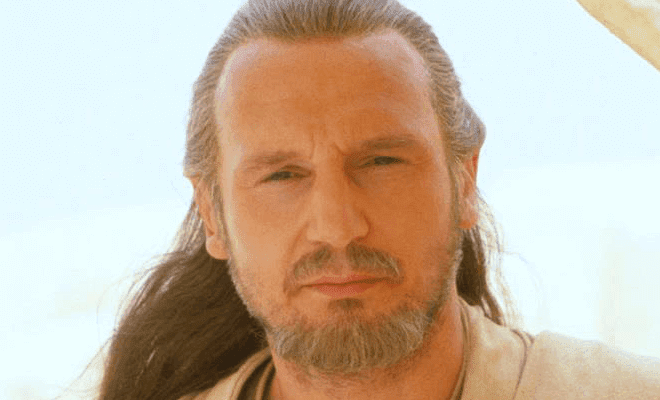 In January 2021, Hollywood A-list actor Liam Neeson (Taken, The Ice Road, Schindler’s List, Kingdom of Heaven) announced that he was retiring from action movies. The action genre has been Neeson’s bread and butter for many years, both before and after the tragic death of his late wife Natasha Richardson, so his fans were naturally upset about this news.

Furthermore, Star Wars fans, in particular, wondered if the actor considered the Star Wars franchise, with its lightsaber duels and daring space adventures, to fall into the “action movie” category.

There have long been rumors of Neeson reprising his prequel trilogy role as Qui-Gon Jinn, Obi-Wan Kenobi’s (Ewan McGregor) Jedi Master, and fans feared his retirement could render these reports false once and for all.

Now, it seems that Neeson may continue to make action films after all. In a recent interview, Neeson told Entertainment Weekly:

“…but I do get a kick out of it [being cast in action films], I must admit. I’m 69! I just turned 69 years of age, and the conversations I have with my agent now are, “Liam, have you read this script? It’s an action script,” and I say, “Chris, let me ask you this, they do know what age I am, right?” “Yes, they do.” “Okay, that’s all I want to know, thank you.” That being said, I keep reasonably fit, and you just have to for some of these films. If you’re playing the lead in any film, you have the responsibility; you’re in practically every scene, it behooves you to be fit.”

EW pressed Neeson about his previous retirement comments, asking him if he had changed his mind and was now trying to “get as much action in” while he still can. The Star Wars fan-favorite responded:

“I guess, and I just did one in Australia with Mark Williams, who did Honest Thief. It’s an action film called Blacklight, we finished it before Christmas, and I just finished another one, and I’m having trouble remembering it. [Laughs]”

It’s worth noting that Neeson’s Qui-Gon Jinn was killed by Sith Lord Darth Maul (Ray Park) in George Lucas’s Star Wars: Episode I – The Phantom Menace (1999), meaning that his return would have to take place in a prequel series or film — which would likely require using de-aging technology on Neeson — or as a Force Ghost.

Many fans assumed Jinn would make his return to the Star Wars universe in the upcoming Obi-Wan Kenobi series, which will see McGregor reprise his role as the iconic Jedi Knight and Hayden Christensen once again portray the Dark Lord of the Sith, Darth Vader.

Neeson, however, has already denied reports that he will be in Deborah Chow’s Kenobi series.

Obi-Wan Kenobi is set to take place about ten years after Star Wars: Episode III – Revenge of the Sith (2005), when Jedi Knight Kenobi has exiled himself on Tatooine after Emperor Palpatine’s execution of Order 66.

The show is expected to include details about Luke Skywalker’s childhood with his aunt and uncle, Owen (Joel Edgerton) and Beru Lars (Bonnie Piesse).

It will also include the lightsaber battle “rematch of the century” between Vader and Kenobi.

A venerable if maverick Jedi Master, Qui-Gon Jinn was a student of the living Force. Qui-Gon lived for the moment, espousing a philosophy of “feel, don’t think — use your instincts.” On Tatooine, Qui-Gon discovered a young slave boy named Anakin Skywalker who was strong in the Force. Sensing the boy’s potential, Qui-Gon liberated Anakin from slavery. The Jedi Master presented Anakin to the Jedi Council, but they deemed the boy too old to begin training and dangerously full of fear and anger. They refused to allow Qui-Gon to train Anakin, but rescinded their decision to fulfill Qui-Gon’s dying wish.

Do you want to see Liam Neeson return to the Star Wars galaxy?