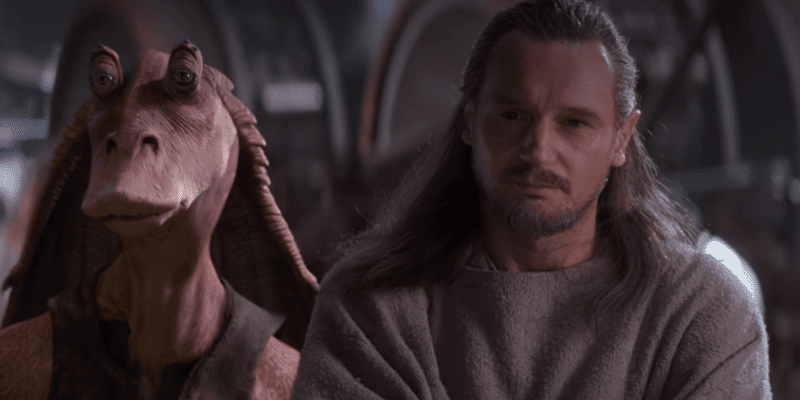 22 years ago, fans were reunited with George Lucas’s Star Wars universe. The prequel trilogy began in 1999 with Star Wars: Episode I – The Phantom Menace and brought the galaxy far, far away back to the big screen.

Taking place many years before Lucas’s original trilogy, the prequels brought new faces into the Star Wars saga, one of which was actor Liam Neeson’s Jedi Knight, Qui-Gon Jinn. With new Star Wars projects on the horizon, will Neeson’s character return?

The Star Wars prequel trilogy received a lukewarm reception upon its debut at the turn of the millennium. While it did seemingly modernize the Skywalker saga with impressive computer-generated technology, Lucas’s story and casting choices for the Star Wars prequel were at the center of much debate among Star Wars fans and critics — namely the widely panned choice to feature the character Jar Jar Binks. The Phantom Menace saw the arrival of a young Anakin Skywalker in the form of Jake Lloyd — the character would, of course, go on to become Luke Skywalker’s father, the infamous Darth Vader, in the original trilogy.

In need of Jedi training, Anakin was taken under the wing of Liam Neeson’s Jedi, Qui-Gon Jinn, and his current Padawan, Obi-Wan Kenobi (Ewan McGregor). Due to Qui-Gon believing Anakin to be the Chosen One, he implored the Jedi Council — led by Jedi Master Yoda — to let him train him in the ways of the Force. We know that Anakin would fall to the dark side later on but Qui-Gon’s intentions were always good, despite his arrogant manner.

Unfortunately, Neeson’s Qui-Gon would meet his doom on the planet of Naboo in a lightsaber duel against Darth Maul (Ray Park), leaving Anakin’s training to his Jedi apprentice, Obi-Wan. However, Neeson did return to the role in Lucas’s animated series, The Clone Wars, where he gave his former Padawan’s, Obi-Wan Kenobi and Anakin, some much-needed information.

It all seems said and done for Neeson’s fan-favorite Jedi but with Ewan McGregor back in the franchise wielding lightsabers in his self-titled series, Obi-Wan Kenobi. Could the Taken actor be set for a return to the galaxy?

In a recent interview with Jimmy Kimmel, Neeson weighed in on whether he has been cast, or will appear, in Deborah Chow’s new Disney+ series. This is what he had to say:

“Yes, I heard that Ewan McGregor was gonna do a series. No, I don’t think so, I haven’t been approached.”

Well, it seems that Neeson really isn’t coming back to the Star Wars franchise. It is a real shame for this interesting character to not find his reprise somewhere in Disney’s and Lucasfilm’s massive Star Wars slate of projects. At one point, there was said to even be an original Qui-Gon Jinn series in the works, although that’s still a rumor.

Neeson went on to joke how “[Disney] don’t have enough money.”

But, as Kimmel points out in the interview, Neeson could be still hiding a Star Wars secret. As we know, the Mouse House loves to keep all its project and casting news tightly wrapped, so even if Neeson does return to Star Wars, it is likely to be a big shock for audiences everywhere. Never say never at Lucasfilm. After all, Palpatine came back despite being thrown into an exploding Death Star, and Boba Fett somehow survived the Sarlacc pit, so who really knows?

The Obi-Wan Kenobi series is currently filming. McGregor is back as is Hayden Christensen as Darth Vader. The new Disney+ series will take place ten years after Order 66 and the events of the prequel trilogy’s movie conclusion, Star Wars: Episode III – Revenge of the Sith (2005). With McGregor and Christensen back it’s, for sure, going to be one of the most interesting reunions to date.

Do you hope that Liam Neeson will one day return as Qui-Gon Jinn?