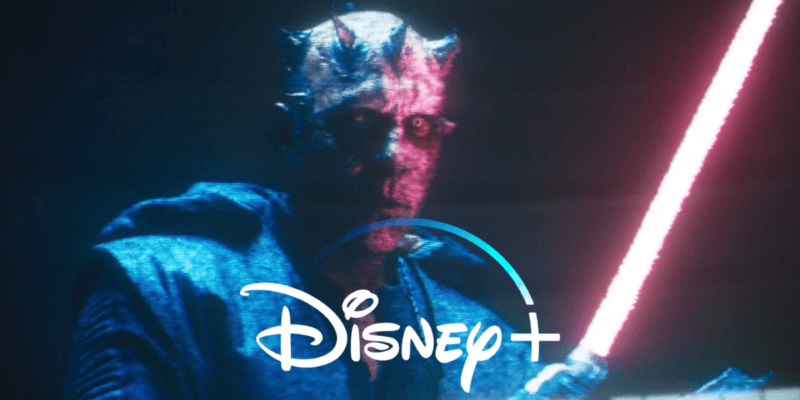 The Star Wars universe has its fair share of terrifying villains. From the infamous Darth Vader in George Lucas’s original trilogy to Chancellor Palpatine (AKA Darth Sidious) in the Star Wars prequels, the franchise’s agents of evil are some of the most popular science fiction characters.

One of these villainous characters quickly became a fan-favorite Star Wars addition. Despite only being in the galaxy — at least on the big screen — for a short while, Darth Maul garnered a huge fanbase, as did his lightsaber, and the character eventually went on to star in many of Star Wars‘ other projects. However, it seems now that Maul might be coming back for his own television series.

In the Star Wars live-action universe, Darth Maul (Ray Park) was introduced as the Sith apprentice of the mysterious Darth Sidious in Lucas’s prequel film Star Wars: Episode I – The Phantom Menace (1999). With a failed skirmish on Tatooine, facing off against Liam Neeson’s Qui-Gon Jinn as the Jedi attempt to flee the desert planet with a young Anakin Skywalker, Darth Maul eventually caught up to Qui-Gon — and his Padawan Obi-Wan Kenobi — on Naboo. While Obi-Wan did defeat (or so it seemed) Maul, the lightsaber duel came at the cost of his Master.

Many Star Wars fans will know that the Sith Lord Maul returned in the animated series, Star Wars: The Clone Wars, where it was revealed he had survived his supposed killing on Naboo and faced off against Ahsoka Tano, among others — he also renounced his Sith apprentice ways. He again returned in Star Wars Rebels to continue his crusade against Obi-Wan Kenobi, seeking revenge for his defeat against the Jedi Knight.

Most surprisingly, Maul made a shocking cameo in Solo: A Star Wars Story (2018) as the true leader of one of the galaxy’s biggest crime syndicates, Crimson Dawn. Park reprised his Phantom Menace role for the movie which also saw the introduction of Han Solo’s love interest, Qi’ra (Emilia Clarke) — but more on this later.

With the former Sith apprentice dying in Jedi Master Obi-Wan’s arms in the deserts of Tatooine, it seems that the Sith Lord’s story is all but wrapped up. But, as we know, Lucasfilm likes to keep Star Wars fans on their toes when it comes to expanding their ever-growing universe, and this new report opens the door for more Maul stories.

According to Geekosity, Darth Maul is set to star in his own Disney+ television series. The reported series which would likely explore the dark side of the force in a way never been shown before is stated to be in early development at Lucasfilm — although the Star Wars studio is yet to confirm this. It should be noted, too, that Maul has been long rumored to appear in multiple Disney+ series. However, this is the first time a report has claimed that a Maul-centric show is actually in early development.

The new report claims that the Darth Maul television show is in discussion but no details of the potential plot have yet been revealed. If Maul does return to the live-action universe, it would perhaps serve as an interesting follow-up to Solo — which left fans on a cliffhanger after Park’s surprising cameo, with Maul telling Qi’ra to meet him of Dathomir to continue their work as Crimson Dawn. The report, however, suggests otherwise.

According to insiders, the Darth Maul show was originally intended to continue that story. But the Lando program could pick up that plot. Currently, I can’t get a definite answer which time frame his show will take place in. No word yet, too, if Ray Park will return as Darth Maul. It seems quite likely he will be offered the role back.

Justin Simien’s Lando television series could pick up the Crimson Dawn plot points — especially if Donald Glover comes back to reprise his role as the fashionable Star Wars icon. But, despite Solo 2 probably never happening, fans are clamoring for the return of Alden Ehrenreich’s Han Solo and the rest of its cast. This reported Darth Maul series could be a way to reintroduce the Solo characters back into the Star Wars timeline.

That being said, a recent entry into Marvel Comics Star Wars line, War of the Bounty Hunters, has revealed that Qi’ra is alive a decade later and is in the need of saving. Saving from what, or whom, we don’t know, but signs could point to it being something that happened with the Sith Lord.

“Maul eventually becomes the godfather of crime in the universe because, as the Empire falls, he takes over,”

We know that Maul never returned in The Walt Disney Company’s Star Wars sequel trilogy, but this plot point — which also saw the live-action introduction of Darth Talon — could be the answer for this rumored new series. Especially if the rumors of Lucas vying for creative control are anything to go by.

Actor Ray Park has also been igniting rumors of Maul’s inevitable Star Wars return when he tagged Tatooine in a recent Instagram post. The new Obi-Wan Kenobi series will, of course, feature the famous desert planet so this could point to Maul facing off against his old nemesis once more. It is unlikely that Maul will show up in The Mandalorian or The Book of Boba Fett with these taking place after his death but never say never in the Star Wars galaxy.

It’s been a rather tumultuous journey for Maul — who is also likely to show up in Dave Filoni’s The Bad Batch very soon. From his early beginnings in the prequel trilogy’s The Phantom Menace to his detailed history in the animated universe, it’s clear that the Sith Lord has a strong following and Maul’s story is far from over.

While this report of a developing Darth Maul series is for now just a rumor, it is probable — at least based on Maul’s popularity and track record of appearing as a supporting character in many Star Wars saga projects — that the fan-favorite villain and his famous lightsaber will return to the franchise in his own show.

Would you like to see a Darth Maul television series?