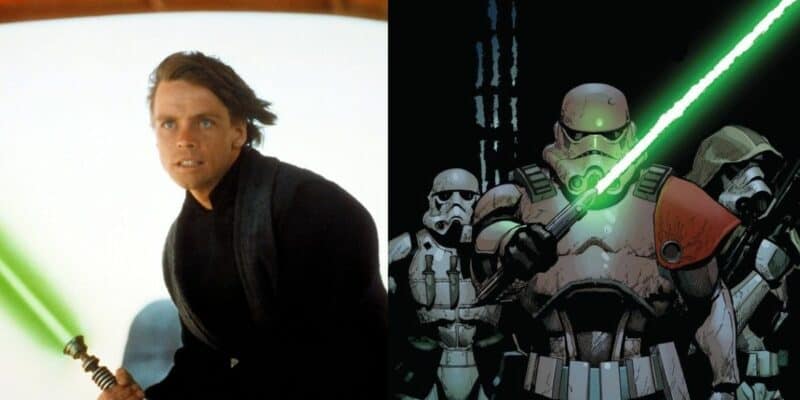 Luke Skywalker (Mark Hamill) didn’t get long to learn the Force before Obi-Wan Kenobi’s (Sir Alec Guinness) death, and much of his lightsaber skills came from an undercover Stormtrooper.

Young Tatooine farmboy Luke Skywalker learned his true identity and destiny from Ben Kenobi in Star Wars: Episode IV – A New Hope (1977). Along with this revelation, Kenobi gives Skywalker the lightsaber of his father, Anakin Skywalker.

Every Star Wars fan was mesmerized by the glowing blue of Skywalker’s lightsaber, and the weapons have become an integral part of the Star Wars universe — most recently inspiring The Mandalorian and Skywalker sequels.

However, Luke learned only a fraction of lightsaber combat skills from Obi-Wan Kenobi before the Jedi Master met his demise to Darth Vader (James Earl Jones) on the Death Star.

Between A New Hope and Star Wars: Episode V – The Empire Strikes Back (1980), Skywalker inadvertently turned to an undercover stormtrooper to further his combat skills with a lightsaber.

In Marvel Comic’s run of Star Wars in 2015 — set immediately after the events of A New Hope — Star Wars fans learned that Sergeant Kreel of Task Force 99, under the direct vision of Darth Vader, taught Skywalker how to properly wield his lightsaber and improve his fighting techniques while infiltrating Grakkus the Hutt’s palace on Nar Shaddaa.

While undercover as the “Gamemaster” in Grakkus’ palace, Kreel alerted the Empire that Luke Skywalker was spotted on the planet (Nar Shaddaa).

Seeing it an opportunity to improve his own skills and create a greater opponent, Kreel revealed his green lightsaber to Luke Skywalker and elite fighting skills.

Luke was still struggling to figure out how he was supposed to become a Jedi, as there was only so much he was able to learn from his master Obi-Wan Kenobi before his death in A New Hope.

As a result, Grakkus’ gamemaster (and undercover stormtrooper) proved to be a great benefit, explaining the growth in Luke’s abilities as a fighter in between the fourth and fifth episodes of the Star Wars saga. However, as soon as Sgt. Kreel’s true identity was revealed, the hunt was on, and Kreel and his SCAR Squadron of elite troopers were relentless in their attempts to hunt down Luke and his Rebel allies.

Vader quickly learned of the training and threatened Kreel’s life if he killed Skywalker, but the stormtrooper quickly reassured the Sith Lord that he was only training the young Jedi Knight for a proper fight against Vader.

Kreel’s attempts to subdue the young Jedi proved a failure, as Kreel’s lightsaber was later destroyed in combat against Luke Skywalker after Task Force 99 captured C-3PO.

Though you’ve probably never heard of Kreel, his training greatly aided Skywalker and prepared the Jedi for the episode battles against Darth Vader in Star Wars: Episode VI – Return of the Jedi (1983).

Kreel’s green blade may have been the inspiration for Skywalker’s second lightsaber in Return of the Jedi, revealing the reason behind the color change.

The Skywalker saga is ever-expanding, and the possibility of seeing Kreel and his squadron of troopers hunting the Rebel Alliance in live-action or animated form is certainly plausible.

Get ready to learn more about the Skywalker lightsaber in the upcoming Obi-Wan Kenobi series on Disney+ in 2022!

Would you like to see Sergeant Kreel in a live-action Star Wars story? Let us know in the comments below!