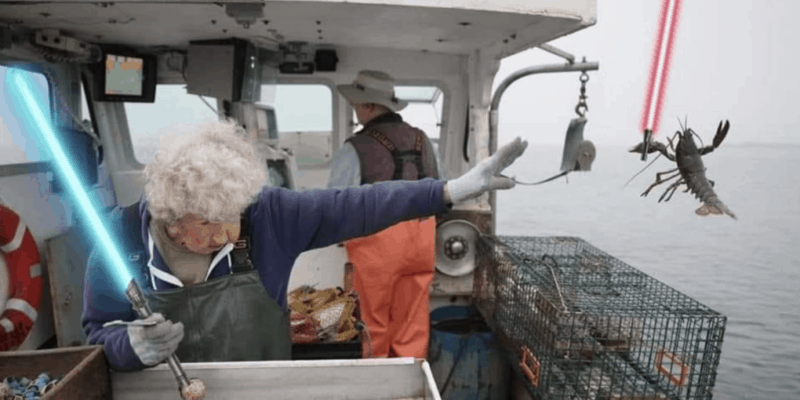 In the Star Wars universe, there is nothing more powerful than the Force.

From “Old Ben”/Obi-Wan Kenobi (Alec Guinness) telling young Jedi Luke Skywalker (Mark Hamill), “The Force is what gives a Jedi his power. It’s an energy field created by all living things. It surrounds us and penetrates us, it binds the galaxy together”, to Grogu (AKA “Baby Yoda”) connecting with countless other Jedi — including, perhaps, Ben Solo (Adam Driver) on the Tython “Seeing Stone” in The Mandalorian Season 2 just last year, the Force is truly the glue behind a galaxy far, far away.

Now, a 101-year-old Maine lobsterwoman has hilariously gone viral for a photo that makes it look as though she is using the Force to pull a lobster out of the Atlantic Ocean into her boat — and the internet can’t get enough.

Leading the charge was Luke Skywalker himself. Actor Mark Hamill is known for his active social media presence, and he was among the first to weigh in on the unintentionally comical image:

The Force is strong with this lobsterwoman.

A Twitter user going by Something is Amiss hilariously wrote:

"After order 66, we still needed to earn a living." – she said. pic.twitter.com/8o8vALFSn8

Liam Kent shared a doctored version of the viral photo, complete with lightsabers — and it appears that the lobster may have been swayed to the dark side:

Never make a lobsterwoman use the force…

Jacob The Handsome, like many Star Wars fans, can’t get enough of the funny photo:

Obsessed with this picture from the Boston Globe of a lobsterwoman using the force to fend off an attacking lobster pic.twitter.com/IvMTxZjhAs

As for the woman in the photo, Virginia ‘Ginny’ Oliver told Maine’s NBC NewsCenter 7 in July that her favorite part of lobstering is “being the boss.”  She shared, “You just have to keep going otherwise you would be in a wheelchair or something.

A short documentary about Virginia  — entitled Conversations With the Lobster Lady — was made a couple of years ago. When she was asked when she will hang up her lobster pots, her immediate response was “When I die”.

More on the Force

The official Star Wars Databank describes the Force as:

The Force is a mysterious energy field created by life that binds the galaxy together. Harnessing the power of the Force gives the Jedi, the Sith, and others sensitive to this spiritual energy extraordinary abilities, such as levitating objects, tricking minds, and seeing things before they happen. While the Force can grant users powerful abilities, it also directs their actions. And it has a will of its own, which both scholars and mystics have spent millennia seeking to understand.

What do you think about this hilarious viral photo?