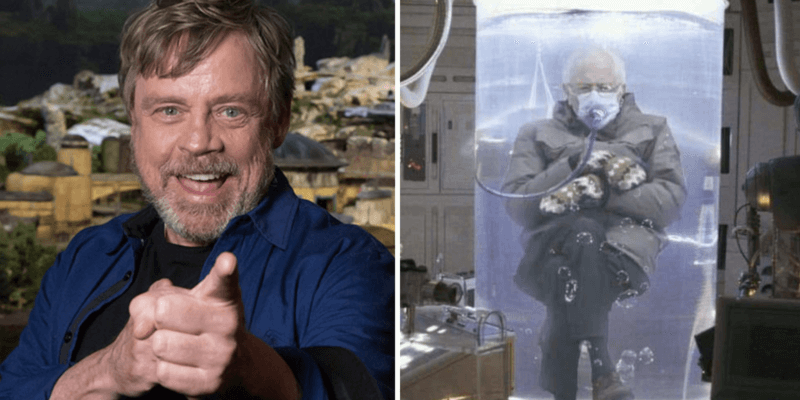 Star Wars icon Mark Hamill — who has now played Jedi Luke Skywalker in the Star Wars franchise for over 40 years, most recently in the sequel trilogy and in a special (and shocking!) Mandalorian Season 2 finale episode cameo — has always embraced the Star Wars fandom.

This is in stark contrast to Hamill’s Star Wars original trilogy co-star, Harrison Ford (Han Solo), who has expressed his distaste for the Star Wars universe on more than one occasion. In fact, a comment Ford made about Force ghosts last year recently went viral again.

Speaking of viral, Hamill has once again showcased his love for Star Wars fans — and for social media — by rounding up the best Senator Bernie Sanders Star Wars memes and sharing them to his active Twitter account.

In case you’re unfamiliar with the Bernie Sanders meme situation, it all started during President Joe Biden’s Inauguration on January 20 in Washington D.C. Senator Sanders (Vermont) was photographed wearing a pair of thick mittens and looking for all the world like a melancholy school teacher on recess duty.

The internet immediately went nuts and the Inauguration Day image has now sparked dozens upon dozens of memes, including a number of Star Wars takes. This is where Hamill comes in.

SO many @starwars/@BernieSanders memes… Thanks to everyone who sent them!

SO many @starwars/@BernieSanders memes… Thanks to everyone who sent them! ? pic.twitter.com/oqTPm6Fkf4

Highlights include Sanders looking dour during the medal ceremony at the end of Star Wars: Episode IV – A New Hope (1977) and joining Han Solo, Chewbacca (Peter Mayhew in the original trilogy era), and Luke Skywalker aboard the Millennium Falcon as a seemingly unwilling passenger.

Hamill also shared a second post filled with Bernie Sanders Star Wars memes, including, perhaps, the best of all: “Bacta Tank Bernie.” This fan manipulation features Sanders sitting — unamused — inside the bacta tank Skywalker was placed in during Star Wars: Episode V – The Empire Strikes Back (1980).

It’s probably only a matter of time before someone also digitally inserts Sanders into one of the tanks from The Mandalorian Season 2, Episode 4 (“Chapter 12: The Siege”) or even Grogu’s (AKA The Child AKA Baby Yoda) frog eggs container.

Hamill acknowledged this was his personal favorite as well:

Do you have a favorite @starwars/@BernieSanders meme? (I’m really loving #BactaTankBernie!)

At this time, Hamill’s future involvement in Jon Favreau and Dave Filoni’s The Mandalorian saga or other Star Wars projects has not been confirmed. Hamill did, however, recently thank Mandalorian Season 2 finale director, Peyton Reed, for giving him the opportunity to reprise his iconic role.

Currently, there are unconfirmed rumors of Grogu’s new Jedi Master returning to The Mandalorian or coming back in a standalone Luke Skywalker series. It is not known if Hamill would be part of either of these projects or if the character would be re-cast — Sebastian Stan has been rumored — given that The Mandalorian takes place about five years after Skywalker Saga film Star Wars: Episode VI – The Return of the Jedi (1983) when Hamill was in his late 20s.

Which Star Wars Bernie meme is your favorite? If you’d like your own pair of Bernie’s mittens, sadly, you will have to find a substitute. The Vermont teacher who makes them out of repurposed wool sweaters has said she is currently sold out.