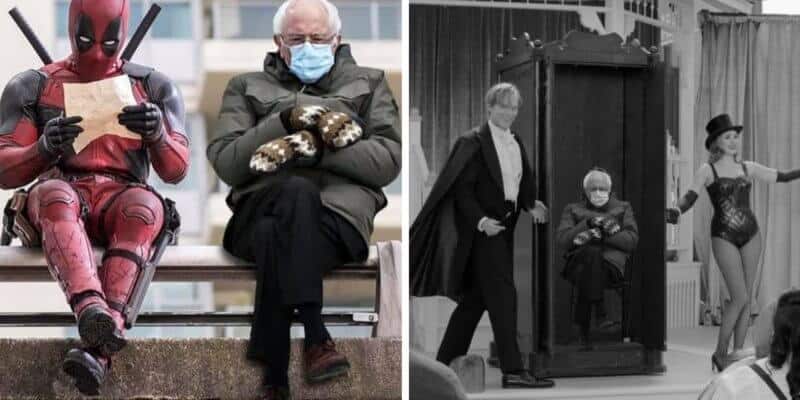 On January 20, 2021, President Joe Biden and Vice President Kamala Harris were sworn into office, and the United States of America had its 46th President. However, during the Inauguration, Senator Bernie Sanders generated a lot of attention from viewers, and it seems that Disney fans and a few Marvel stars wanted in on the action.

In all the inauguration fashion news, let us not overlook Senator Bernie Sanders’ mittens pic.twitter.com/BlZivZ8cMP

At the 2021 United States Presidential Inauguration, many American politicians were in attendance, including Bernie Sanders. If you use Twitter or Instagram, you likely have already come across the newest Sanders meme that shows a photo of the politician either sitting cross-legged in his winter jacket (not a more upscale pea coat) with his arms crossed showcasing his large knit mittens. The seated photo is the meme that is currently blowing up the internet, likely due to the combination of Sanders’s outfit and unimpressed face.

Since yesterday, Disney-themed Bernie Sanders memes have been blowing up the internet!

Rohde’s Roadies (@RohdesRoadies) posted a photo of Sanders as John in Carousel of Progress with the caption “Forget the Hall of Presidents refurb.”

Bernie went to Disney after the Inauguration! ?? pic.twitter.com/G0ahkyxAXL

And now, Marvel stars are joining in the fun and sharing some Bernie Sanders memes.

Avengers star Paul Bettany joined in placing Sanders inside of the actor’s latest Disney+ series, WandaVision. As you can see in the meme below, Vision (Paul Bettany) and Wanda Maximoff/Scarlet Witch (Elizabeth Olsen) are performing their sitcom series, and the magic show scene in Episode 2 now has an added surprise — Bernie Sanders!

WandaVision opened to rave reviews from fans and has been “Certified Fresh” on Rotten Tomatoes! Currently, the first 2 episodes are available on Disney+ with new episodes coming out each Friday.

If there was going to be one actor and Marvel superhero that would jump on the Bernie Sanders meme bandwagon, it is pretty obvious that Canadian jokester Ryan Reynolds would claim that spot. The Deadpool actor reposted Instagram user @fotojo_stills meme of senator Bernie Sanders sitting on a bridge alongside Deadpool while the hero was reading a letter.

“It will be rated R and we are working on a script right now, and Ryan’s overseeing a script right now. It will not be [filming] this year. Ryan is a very busy, very successful actor. We’ve got a number of things we’ve already announced that we now have to make, but it’s exciting for it to have begun. Again, a very different type of character in the MCU, and Ryan is a force of nature, which is just awesome to see him bring that character to life.”

We also previously reported that Ryan was in talks to sign a major deal with Marvel, and although it was not confirmed that Deadpool 3 was this specific deal in question, Feige’s confirmation of the third film makes it quite likely.

Which Bernie Sanders meme made you laugh the most? Let us know below!