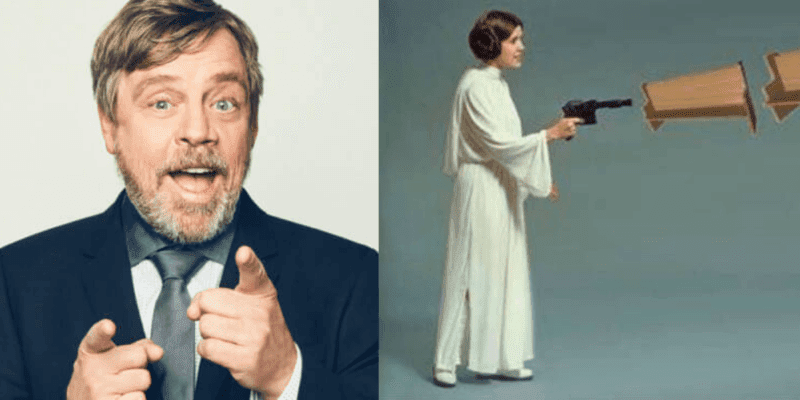 Actor Mark Hamill is nothing less than a legend in the Star Wars community. Once Luke Skywalker gets going on social media, sharing behind-the-scenes facts or hilarious stories about filming the original trilogy, your day gets a little bit better.

For over four decades, Mark Hamill has been entertaining Star Wars fans through numerous mediums, and now he shares the best of Star Wars-related content on his Twitter and Instagram accounts.

Kinda embarrassed to admit that when I first saw this, I didn’t get it.? What’s so funny about Leia shooting at 2 park benches?!? Then hours later in the shower, it hit me: those aren’t benches… they’re PEWS!

A genius fan replaced the laser blasts with pews from a church, killing two birds with one stone for Star Wars memes.

To be honest, I didn’t get the joke either. I thought they were regular wooden benches. Hamill hilariously revealed it took him the course of numerous hours to get the joke finally, and of all places, it came to him in the shower!

Possibly more than any other Star Wars cast member, Mark Hamill embraces the Star Wars community with open arms and shares the best of Star Wars-related content with his fans. The actor often interacts with his followers and even hilariously calls out “trolls,” giving him or fans of the movies a hard time.

Hamill is currently in cold Serbia filming his upcoming film, The Machine, with comedian/producer Bert Kreischer (The Shield, Something’s Burning). While there’s no confirmation from Lucasfilm or Disney on Hamill’s future involvement with projects like The Mandalorian,  Luke Skywalker’s influence over the Star Wars universe is far from being done. Hamill will hopefully return to the big screen or streaming screen soon again.

What do you think about Mark Hamill’s latest post? Let us know in the comments below!