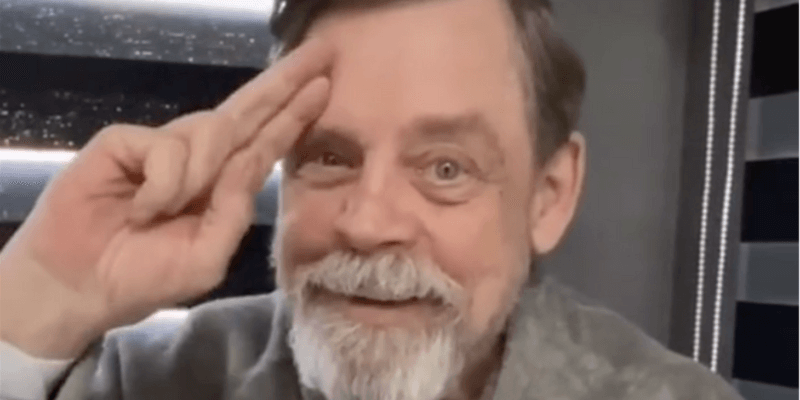 Mark Hamill is nothing short of a legend in the Star Wars franchise. Alongside his original trilogy costars Harrison Ford (Han Solo) and the late Carrie Fisher (Princess Leia Organa), Hamill has been bringing Jedi Knight Luke Skywalker to life for over four decades in the Skywalker Saga.

Perhaps more than any other Star Wars cast member, Hamill has embraced the fan community, often going out of his way to spend time — even virtually during the COVID-19 pandemic — with Star Wars lovers around the world. The actor also often frequently interacts with his social media followers with an active presence on both Twitter and Instagram.

Recently, 69-year-old Hamill also joined the popular platform TikTok with his usual handle, @hamillhimself. Hamill initially claimed his first TikTok video — which featured his adorable dog, Mable — would probably also be his last, but the Star Wars legend has now amassed over 1.4 million followers and upwards of 4 million likes, so it doesn’t seem like he’s going to quit the social media site anytime soon.

Hamill offered the perfect response (and shared the original video) in his own post. Ryan said:

“It is unbelievable how some of us can spend years on this app, post hundreds of hours of content, never crack a million views, and this ‘actor’ shows up from this old a** movie, drops one video, gets three million hits, and half a million followers in a day. This is b*ll****.”

“Hi! It’s that ‘actor’ from that old a** movie. What a wonderfully warm welcome to TikTok you’ve given me and it’s nice to see another satisfied customer.”

Perhaps the funniest part of the exchange is Ryan’s reaction video, in which he spews coffee out of his mouth when he views his notifications and sees Hamill’s response:

Hamill is currently in Serbia filming his upcoming movie, The Machine, with comedian/producer Bert Kreischer (The Shield, Something’s Burning).

Will Hamill return as Luke Skywalker?

Prior to that, Hamill had appeared in the Star Wars sequel trilogy — he was in the final scene of Episode VII – The Force Awakens (2015) when Rey (Daisy Ridley) discovered him on Ahch-To and featured heavily in Rian Johnson’s Episode VIII – The Last Jedi (2017).

In the Peyton Reed-directed Mandalorian episode, Skywalker took Grogu (AKA “Baby Yoda”) as his Padawan, leaving bounty hunter Din Djarin (Pedro Pascal) without his constant companion for the first time since we met him.

Should Skywalker return to The Mandalorian saga during the Star Wars: Episode VI – Return of the Jedi (1983) era, it would be costly and inefficient to use a CGI version of Hamill. Therefore, rumors abound that Marvel actor Sebastian Stan could play a young Luke.

The uncanny resemblance between the Winter Soldier actor and Hamill from the original trilogy years has long been noted. In fact, both Hamill and Stan have weighed in on the possibility of Stan being cast in the legendary Star Wars role.

At this time, nothing about Skywalker’s future in the Star Wars universe has been confirmed by Lucasfilm or Disney.

What do you think about Mark Hamill’s latest social media profile?