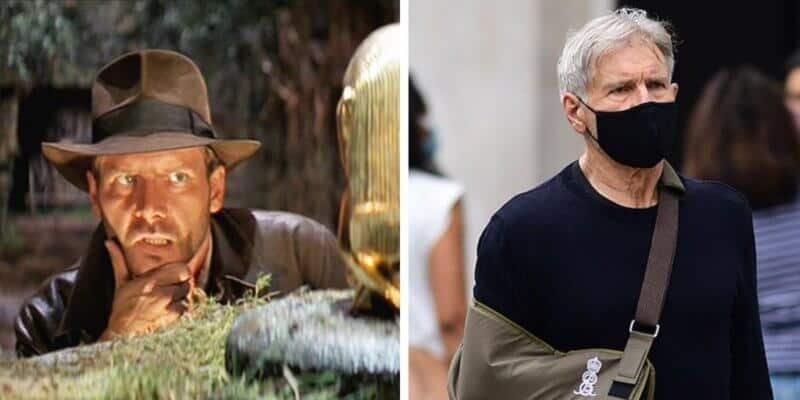 Hollywood Star Harrison Ford is known for many roles, but one of his most iconic is Indiana Jones (or Henry Jones, Jr.).

The Indiana Jones film franchise, owned by Disney, has created four incredible films, all starring Harrison Ford as the title character. After Indiana Jones and the Kingdom of the Crystal Skull (2008), many franchise fans were not sure if a fifth film would be made, but once the film was announced, fans were ecstatic!

Filming is currently underway in Great Britain; however, it has not been without challenges. As we have recently reported, Ford was injured on set while filming.

…[the actor] hurt himself rehearsing a fight scene in Indiana Jones 5, sources tell Deadline. The extent of his injury wasn’t immediately known, but it involves his shoulder. Director James Mangold will continue to shoot around him while the appropriate course of treatment is evaluated. The filming schedule will be reconfigured as needed in the coming weeks. Disney has set the Lucasfilm action thriller for a July 29, 2022 release date.

At 78, some may think an injury could have kept any actor out of commission for a while, but it seems that Ford was ready to break out his whip after a speedy recovery. People posted photos of Ford walking around London with a sling.

On Friday, the actor, 78, was spotted taking a stroll in London’s Mayfair district with his right arm on a khaki sling after he suffered on injury while rehearsing for Indiana Jones 5. The actor wore a navy sweater, gray pants and wore a black face mask as he took in the views.

The publication (@people) also Tweeted the news, and you can view an image of the actor below:

Although we have yet to see Ford back on set, it seems that the actor is continuing to heal and will hopefully return to the shortly.

Steven Spielberg will not direct Indiana Jones 5; however, James Mangold (Logan) will helm the film. Spielberg will continue to stay on board as a producer.

At the moment, we do not have too much information regarding the film’s plot. It was reported at one point that the movie would take place in space, although the latest rumors indicate that it will take place during the space race of the 1960s and may somehow involve a space setting. Keep in mind, however, that neither of these rumors have been confirmed at this time.

The film is currently slated for a July 2022 debut.

Are you excited to see Harrison Ford return to the Indiana Jones franchise?