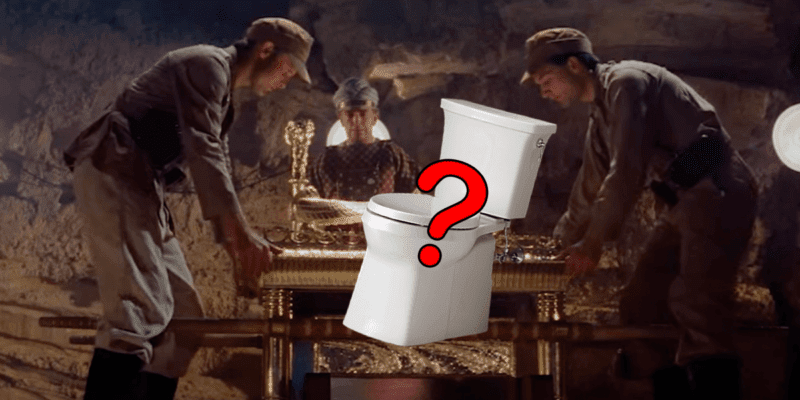 What if we told you that the scrape of the lid being removed from the Ark of the Covenant was more than just stone and gold? It was a toilet. Yup, a good ol’ Johnny on the spot…and the bite Indy gives the airplane mechanic? That’s no skin bite…

Let’s listen in with award-winning foley artists to hear how they created the Indiana Jones sound effects in 1981.

Called “the father of Skywalker Sound” by Steven Spielberg, Ben Burtt is an Academy Award®-winning sound designer, as well as an accomplished filmmaker who has written, directed, and served as film editor on a vast array of projects. John Roesch is a professional Foley artist who has worked in the film business for over 40 years. With nearly 600 credits, Roesch has lent his skills to many of the biggest blockbusters of all time.

These two amazing artists put their heads together over 40 years ago to create these amazing sound effects, and if you closed your eyes while watching the movie, you may hear some of these sounds very differently after hearing these clips! For instance… The Lost Ark of the Covenant is a toilet. Yup. Taken from his house, Burtt scrapes the toilet tank lid over a piece of garden stone and as he shifts it, creates the opening sound. No butts about it. We think that’s hilarious!

SQUISH!! HISSSS!!! Perhaps you’re listening to the snakes… why did it have to be snakes? The slither sound effect is actually sound designer Ben Burtt squashing around in his wife’s macaroni and cheese recipe. Might as well have lunch while you make a film! Of all the Indiana Jones sound effects, this one has to be the tastiest of them all.

CHOMP! Remember when Indy fights with the Airplane Mechanic (who coincidentally plays all three big giant baddies in the films)? Surely Indy didn’t draw blood, but the bite sure sounded vicious. Take a bite out of a heart of crunchy celery and you might hear the exact same sound design! The Indiana Jones punch you hear in the film are tennis balls, wrapped in stockings and whipped at a potting soil bag!

But not all the sounds effects were created especially for Indiana Jones and the Raiders of the Lost Ark. Sadly, the famous Wilhelm Scream is a canned, iconic stock sound effect from 1951 existing in over 400 movies, but it’s still one of our favorites. In fact, you can hear it twice in A Goofy Movie!

Paramount Pictures released this special Foley Artist clip in honor of Indiana Jones and the Raiders of the Lost Ark‘s 40th birthday on June 8th, 2021. The unique sound effects used in the film were first requested by the production team and then created by the foley artists. Sound designers Ben Burtt and John Roesch worked together 41 years ago to creatively create the punches, bites, bangs, whips, and sword whirls that we know so well. Check out the clip and hear them for yourself:

From the YouTube channel, we get an official description of the clip:

Go behind-the-scenes with legendary sound designer Ben Burtt and John Roesch, one of the original Foley artists who worked on the film, as they recreate some of the iconic sounds that help make Raiders of the Lost Ark a true cinematic classic.

To celebrate the film’s 40th anniversary, Burtt and Roesch came together on the Foley stage at Skywalker Sound in Northern California and used some of the original props to demonstrate how they developed the distinctive face punches, sword swishes, snake slithers—why did it have to be snakes?—and more. You won’t want to miss what Burtt used to create the sound of the Ark’s lid being removed!

What Indiana Jones sound effects are your favorite? Leave us a comment below!

Comments Off on The Lost Ark Was a Toilet? Creative Choices of ‘Indiana Jones’ Sound Artists