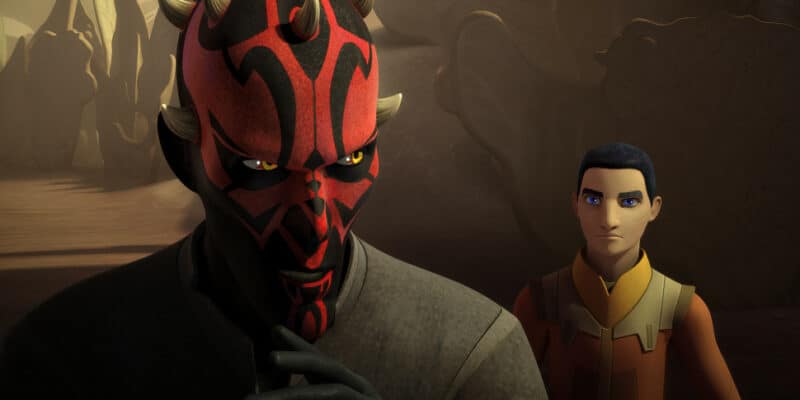 The Star Wars canon comic series, War of the Bounty Hunters, has followed the hunt for Han Solo’s carbonite-encased body, reintroducing a slew of popular characters — including Jabba the Hutt, Boba Fett, and Solo: A Star Wars Story (2018) star Qi’Ra — along the way.

In “War of the Bounty Hunters #3”, Star Wars fans saw a new side of Qi’ra, as Maul trained her in his fighting techniques — if you will recall, at the end of Solo: A Star Wars Story, following the apparent demise of Dryden Vos (Paul Bettany), Qi’ra (Emilia Clarke) contacted Maul (Ray Park) and expressed her interest in climbing the ladder of his Crimson Dawn crime syndicate.

In Season 3, Episode 11 (“Visions and Voices”), Bridger finds himself traveling to Maul’s homeworld of Dathomir in the villain’s Gauntlet fighter, Nightbrother. Wookieepedia summed up the events that led to this situation:

Ezra and Kanan ignite their lightsabers, and Maul says that he did not come to fight, but to talk with “his” apprentice. When Kanan emphasizes to Maul that Ezra is not his apprentice, Maul replies, “Yet.” Ezra asks Maul how he found them, and he explains that when Ezra abruptly severed their connection to the holocrons, both of them were left with fragments of the other person’s memories and knowledge, including the location of Chopper Base…

…Ezra departs with Maul in his Gauntlet fighter Nightbrother. Kanan then rides his speeder bike back to Chopper Base, where he finds Sabine working on the Phantom II. Sabine reports that she has been tracking Ezra’s signal, and that Maul’s ship has made the jump into hyperspace. Kanan and Sabine depart Atollon on the Phantom II.

A user going by Spixene wrote:

Since Maul trained Qi’Ra in his fighting style, as revealed in War of the Bounty Hunters #3, do you guys think that he showed his techniques to Ezra too?

Since Maul trained Qi’Ra in his fighting style, as revealed in War of the Bounty Hunters #3, do you guys think that he showed his techniques to Ezra too? from starwarsspeculation

I dont they really did [spend time together offscreen] tbh, at most it was like Maul suggesting Ezra use the dark side of the force and trying to corrupt him slowly

Another fan, FiveODeuce, remarked that it would have been interesting to return from a Rebels season gap to discover the duo had worked together, perhaps even learning that Maul had taught Ezra to duel the way he did with Qui-Gon Jinn (Liam Neeson) in Star Wars: Episode I – The Phantom Menace (1999):

Spixene returned to admit that the theory is a “bit far-fetched”, but given Maul and Ezra’s Force bond, it is certainly possible that the former Sith Lord could have taught the young Padawan lessons that weren’t fully explored onscreen:

He can talk to him like Vader does with Luke at the end of empire and Rey & Kylo in the sequels so maybe he could teach him some stuff without demonstration although I admit it’s a bit far fetched. We know Ezra learned stuff from the Sith holocron tho

Although it doesn’t seem likely that Ezra and Maul had much — if any — time offscreen together during Rebels, both characters are seemingly set to make live-action appearances in the Star Wars universe next year, albeit in different parts of the Star Wars timeline.

Ezra — presumably being played by Aladdin (2019) star Mena Massoud — is set to make his live-action debut in Jon Favreau and Filoni’s The Mandalorian saga. Most fans anticipate that he will appear in Mandalorian spinoff, Ahsoka, alongside Ahsoka Tano (Rosario Dawson).

As for Maul, actor Ray Park has teased that he will be once again donning his Dathomirian horns in Deborah Chow’s Obi-Wan Kenobi series alongside prequel trilogy stars Ewan McGregor (Jedi Master Obi-Wan Kenobi) and Hayden Christensen (Darth Vader/Anakin Skywalker).

Although the two characters’ story arcs in the Star Wars franchise may not intersect again anytime soon, it seems that we are far from finished with both Maul and Ezra, so time will only tell what happens between the duo in the future.

Would you like to see the Ezra Bridger and Maul story somehow continue in Star Wars?