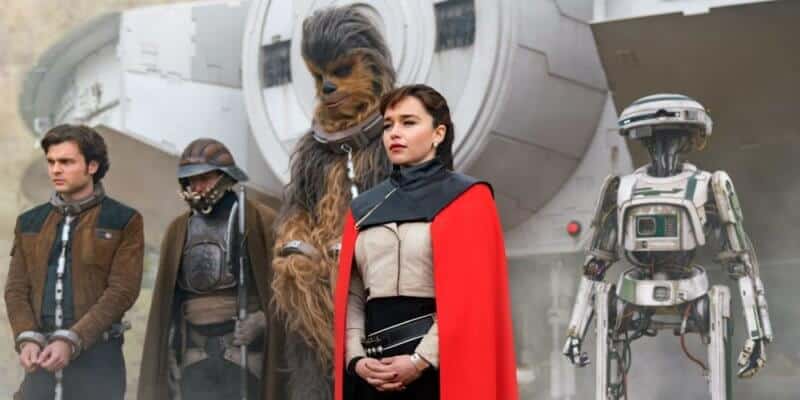 Star Wars just announced a brand new comic series that will take place between the events of Star Wars: Episode V – The Empire Strikes Back (1980) and Star Wars: Episode VI – Return of the Jedi (1983). Bringing back a principal character from Solo: A Star Wars Story (2018), the upcoming event might pave the way for Emilia Clarke’s Qi’ra to return to the live-action Star Wars Universe.

Star Wars is quietly filling in the gaps between its landmark movies. Despite the original trilogy nearing four decades since its climax, Star Wars shows no signs of slowing down with its robust slate of upcoming television series, new movies like Patty Jenkins’s Rogue Squadron (2023), and Taika Waititi’s outing, and ever-growing portfolio of novels and comic books.

What is Crimson Reign?

Now, hot on the heels of the War of the Bounty Hunters series from Marvel Comics comes Star Wars: Crimson Reign. A new event from popular Star Wars writer Charles Soule (Light of the Jedi) documenting the adventures of Qi’ra — the character Game of Thrones actress Clarke made famous — will debut in November 2021.

This limited series will debut in November 2021 and will consist of five issues, all of which will be written by Charles Soule, a veteran Star Wars author who has not only worked on a ton of Star Wars comics, but is one of the key writers for The High Republic. His book, Light of the Jedi, is the novel that kicked off this new initiative that takes place about 200 years before The Phantom Menace.

Soule revealed why choosing Qi’ra was ideal for the greater Star Wars story:

“But it was really when I knew I had a secret weapon to deploy storywise that the seeds of Crimson Reign began to take root in my mind: Qi’ra, former paramour of Han Solo and current leader of the infamous Crimson Dawn crime syndicate.”

Qi’ra first returned to Star Wars in the first issue of War of the Bounty Hunters where she became involved in the hunt for Han Solo’s carbonite-frozen body (along with Darth Vader and the rest of the galaxy). Qi’ra’s comeback was somewhat a surprise but perfectly made sense, what with her romantic and politically-charged history she had with the roguish scoundrel.

Soule also revealed that the Knights of Ren — the group of warriors eventually served Kylo Ren (Adam Driver) — will feature in Crimson Reign.

What happened to Qi’ra in Solo: A Star Wars Story?

The latter’s character was the public face of the crime syndicate, Crimson Dawn — the organization led by Sith Lord Maul during the reign of the Galactic Empire. The end of the Star Wars movie saw Qi’ra being called to Dathomir by Maul to continue working together.

How could Qi’ra show up in The Mandalorian Universe?

For context, The Mandalorian, The Book of Boba Fett, and Ahsoka, all take place in the same timeline — that is, around five years post-Return of the Jedi. Qi’ra is currently active as part of the Crimson Dawn syndicate in between the events of Empire Strikes Back and ROTJ, meaning it’s not that much of a stretch for Clarke to return to live-action in The Mandalorian timeline. Born in 31 BBY, Clarke’s character would be around 40-years-old if she showed up in the bounty hunter series.

Star Wars will know that Maul and Crimson Dawn have a sordid history with Mandalore, and when looked at that relationship through the lens of Jon Favreau’s The Mandalorian Season 2 finale, it begs the question of whether there could be old demons to face for our Mandalorian warriors. The finale introduced the Darksaber into live-action as well as set up a tense dynamic between Din Djarin (Pedro Pascal) and Bo-Katan Kryze (Katee Sackhoff) — the owner of the Darksaber is the rightful ruler of Mandalore.

Then there’s The Book of Boba Fett which sees Temuera Morrison (Boba Fett) join forces with Ming-Na Wen (Fennec Shand) in a new series coming this December. Thanks to the Marvel Comics series, War of the Bounty Hunters, we know that Qi’ra and Boba Fett have already crossed paths in some capacity. We also know, thanks to Morrison, that The Book of Boba Fett will “go back in time” to the events between Empire and ROTJ, meaning a potential direct connection to the auction of Han Solo from the comic book series could make its way to the small screen.

Clarke has said recently that she always wondered what happened to her character (even writing pages of notes) and would have liked to explore the next steps following that dramatic ending in the Star Wars film, Solo. Well, Soule’s new series, Crimson Reign, may mark the perfect occasion to bring the actress back into Star Wars.

Do you think Qi’ra’s live-action return is imminent? Let us know in the comments!