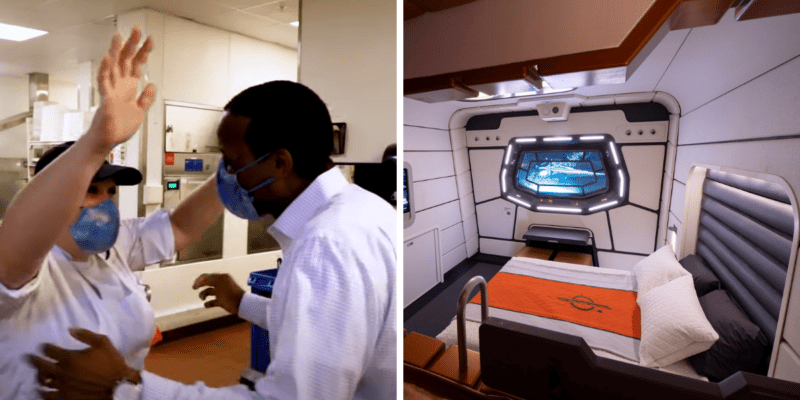 And Disney is now selecting its crew for the maiden voyage of the Halcyon starcruiser.

Disney Parks Blog released a heartwarming video showing Cast Members being surprised with their offer to work onboard the Halcyon when it launches on March 1, 2022.
Jerome Smith, the General Manager aboard the Star Wars: Galactic Starcruiser, is shown greeting Cast Members behind the scenes and giving them the much-anticipated news:

While these cast members have been making magic every day in a variety of roles, they’ve also raised their hands for the opportunity to push the limits of storytelling, to exceed the fundamental standards of guest service and help passengers live out their Star Wars adventure with the opening of Star Wars: Galactic Starcruiser.

While future Guests aboard the ship have been planning their costumes and packing their lightsabers, Cast Members have been applying for these much-coveted roles to bring the new vacation experience to life:

After all, while passengers travel aboard the Halcyon starcruiser, what’s a ship without an amazing crew and dedicated leaders? The hand-selected leadership team for this experience received their calls as well and will be boarding soon, readying the vessel and crew for their next uncharted adventures. This special team now proudly displays the insignia of Chandrila Star Line—the incomparable interplanetary travel group which the Halcyon starcruiser belongs to—as part of their daily wardrobe. This prestigious symbol serves as a reminder of their commitment to providing the finest service in the galaxy, and you can be sure that the leaders wearing this coveted badge of honor will deliver the finest service as stewards of Chandrila Star Line.

Rachael, a chef assistant onboard Star Wars: Galactic Starcruiser, was thrilled at the news:

“I’ve been with Disney for just over five years and an opening team is just something I wanted to be a part of. I feel like the teamwork and the bonding is a little more special because you’re all starting from the same level. I’m excited to learn. I’m excited to meet new people. It’s going to be an awesome experience.”

You can watch the video below to see the amazing surprises Disney has for its Cast Members:

This week, Disney Parks opened its general booking window for Star Wars: Galactic Starcruiser after presale opportunities saw many sailings sell out. Until then, the only Guests who have been able to book reservations are Club 33 members, Disney Vacation Club members, Disney VISA Cardholders, Walt Disney World Annual Passholders, and residents of Golden Oak.

Star Wars: Galactic Cruiser will have 100 cabins and suites on board, and is expected to sell out quickly. Reservations for the two-night experience are fully booked for the whole month of March. The high rate of bookings comes at no surprise, as this hotel is a first-of-its-kind immersive experience perfect for Star Wars fans of all ages.

Have you managed to book a voyage aboard the Halcyon? Let us know what you’re most excited for!