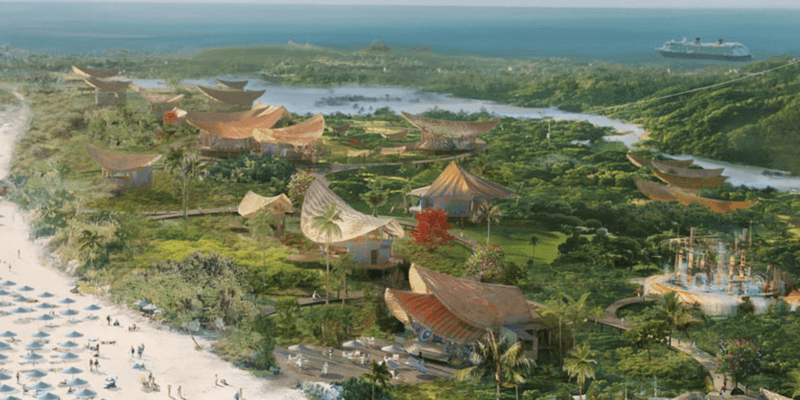 During today’s Credit Suisse 23rd Annual Communications Conference, Walt Disney Company CEO Bob Chapek provided an update about various sectors of Disney’s operations — and he has some exciting news for Disney Cruise Line fans! He confirmed that a second private island is currently in development.

Chapek said that Disney is excited about a “second island destination and three new ships”. This, of course, includes the new Triton Class Disney Wish cruise ship that will join the Disney Dream, the Disney Fantasy, the Disney Magic, and the Disney Wonder when she takes her maiden voyage in June 2022.

Previously, now-retired Walt Disney Imagineer Joe Rohde had been working on Lighthouse Point, another private island that would operate in addition to Disney’s exciting Bahamian island destination, Castaway Cay. The last update on the Lighthouse Point project, however, came in August 2020 on Rohde’s Instagram account.

The Lighthouse Point location was first announced in 2019 at the D23 Expo in Anaheim, California. At the time, Disney Parks Blog post about the project noted:

[The destination] will be located on the beautiful island of Eleuthera at a place called Lighthouse point. The new destination will celebrate both the stories and culture of The Bahamas, as well as the natural environment of Lighthouse Point itself.

The post went on to share that The Walt Disney Company is committed to environmentally-friendly practices as they develop this new Disney Cruise Line private island port:

Disney Cruise Line has committed to develop less than 20 percent of the property; employ sustainable building practices, including an open-trestle pier that eliminates the need to dredge a ship channel; establish environmental monitoring programs during construction and operation; and donate more than 190 acres of privately owned land to Government, among other commitments.

You may not be aware that through the Disney Conservation Fund, Disney has provided more than $13 million to marine conservation programs around the globe, including several in The Bahamas. Since 2007, Disney has been directly involved in leading a multiyear initiative to protect and rehabilitate coral reefs in The Bahamas and will continue to work with leading conservation organizations and communities to protect special places there.

During today’s event, Chapek did not confirm details about a timeline for Lighthouse Point or if the name for the project has changed — he referred to it only as a “second private island destination”.

Are you looking forward to Disney’s second private island?