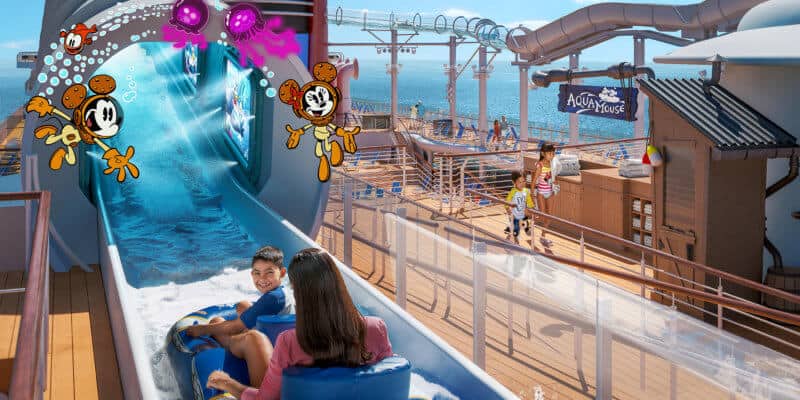 The first-ever attraction at sea is coming to Disney’s newest ship on the fleet, the Disney Wish.

Here is everything you need to know about the AquaMouse!

The AquaMouse is a brand-new attraction and the first of its kind at sea. This new attraction will feature the animated style of the new Mickey Mouse cartoons shorts just like the Mickey and Minnie’s Runaway Railway attraction found at Disney’s Hollywood Studios in Walt Disney World and coming soon to Disneyland.

Danny Handke, Creative Director, gave us some details about the AquaMouse! Stating that the attraction will be a wild water ride that spans over 700 feet of the upper deck.

The name of the short that the AquaMouse will be based on is called Scuba Scramble — how fun!

Definitely reminds us of Mickey and Minnie’s Runaway Railway, and we hope to see more of these Mickey Mouse animated shorts attractions pop up at Disney theme parks and ships all over the world!

Here are some more details about the AquaMouse, per a press release from Disney:

Families will be immersed in “The Wonderful World of Mickey Mouse” animated shorts aboard AquaMouse, the first-ever Disney attraction at sea. Complete with show scenes, lighting and special effects, and splashtacular surprises, this first-of-its-kind water ride will send guests on a fun family adventure through 760 feet of winding tubes suspended high above the upper decks. As the story goes, Mickey and Minnie are starting their very own seaside excursion company — aptly named “Port Misadventures” — on board the Disney Wish, and adventuresome cruisers will join them on an undersea excursion to Mermaid Lagoon that will inevitably (and hilariously) go awry.

The journey will begin when guests board their two-seater ride vehicles and ascend into a magical tunnel that will teleport them into the cartoon world of “Scuba Scramble,” a new animated short that plays out through oversized virtual portholes. Along the way, they’ll encounter curious sea creatures, familiar Disney friends and more than 60 water effects that bring the subaquatic hijinks to life – all perfectly synched to an original musical score by Emmy-nominated composer Christopher Willis (“The Wonderful World of Mickey Mouse”).

At the height of the show, guests will blast out of the tunnel and embark on a wild water ride around the upper decks. First, they’ll zip into the forward funnel through an enclosed tube surrounded by dazzling lighting effects, followed by a quick dash through a dark tunnel that opens up to reveal breathtaking views of the ocean.

They’ll then jet up and down a series of speed blasters as they are propelled toward the grand finale: a soaring loop over the edge of the ship, with clear views down to the deep blue sea. With that, they’ll splash down for a sendoff message from Mickey and Minnie – another successful tour in the books!

Can’t wait to book a trip on the exciting new Disney Wish? You can begin booking your sailing on the Disney Wish starting May 27. Click here for more details.

The Disney Wish will have its maiden voyage on June 8, 2022. The Wish will sail 3 and 4-night cruises out of Port Canaveral which is located about an hour away from Walt Disney World. You can read a breakdown of the Disney Wish itineraries here.

Be sure and check out all the details about the Disney Wish including restaurants and shows here!

What do you think about the AquaMouse coming to the Disney Wish? Let us know in the comments!