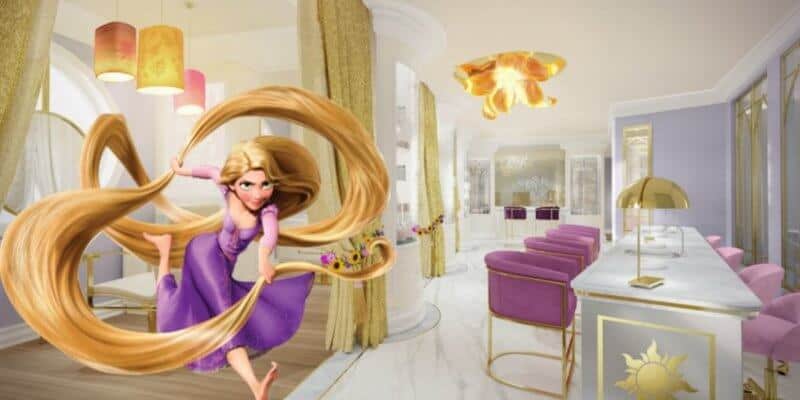 Disney has a lot of IP that can fit perfectly in many spaces within the company. From having a dining experience in the massive Beauty and the Beast-inspired dining room at Magic Kingdom to adding in hints of Coco into the Mexico pavilion at EPCOT and so much more, Disney does a good job placing their IP in the right spot.

So far, Tangled has been an incredibly popular film, but we have not seen it displayed too heavily when it comes to Disney’s theme parks — aside from being the most beautiful bathroom at Magic Kingdom! However, Disney Cruise Line has sprinkled in some Tangled with Rapunzel’s Royal Table on the Disney Magic.

Now, Tangled is finally filling the ultimate spot when it comes to creating a synergistic fit — the new Disney Wish will open with an Untangled Salon, based on the lost princess herself! With Tangled being all about hair, this combination fits as perfectly as Cinderella’s glass slipper!

At Untangled Salon, you can let your hair down (and have it styled any way you want) in a light and airy environment that is perfect for pampering. Inspired by Rapunzel, this chic, high-end salon will be adorned in shades of purple and gold, decorated with floating lantern light fixtures and outfitted with custom cut-metal privacy screens depicting Rapunzel’s own paintings. One side of the space will even gleam and glow with the golden light of a signature chandelier that evokes the iconic flower that gave her hair its magical qualities! In addition to haircuts and styling, the menu of services at Untangled Salon will include manicures, pedicures, teeth whitening and skin treatments.

Although the Untangled Salon is meant more for longer hair, men can enjoy their all-new salon titled Hook’s Barbery!

Hook’s Barbery will be a unique twist on a traditional European men’s salon, offering cuts, shaves, and nail and skin care. Decked out in dark woods, handsome leather chairs and ornate golden mirrors, the space will brim with narrative details inspired by its namesake, Captain Hook: an inlaid wooden map of Never Land, a hidden pocket watch and — of course — a hook, to name a few. A trio of seemingly nondescript lanterns will occasionally come to life with lighting and audio effects to signify Tinker Bell jumping from one fixture to another.

Not only will Hook’s Barbery provide salon and barber services, but it will also boast the ultimate toast to a pirate’s life: a hidden bar! This (not-so-secret) treasure trove of pre-Prohibition bourbons, vintage whisky and port, aged rum and premium spirits will be a liquor enthusiast’s paradise, ideal for low-key hangouts, romantic date nights, hosted tastings and special evening events.

From the sound of each salon location, it seems like these offerings are meant to attract an older adult crowd, unlike Bippity Boppity Boutique, which is seemingly missing from the ship! Aside from not having the fan-favorite dress-up location, the all-new luxury Disney Wish will hold Star Wars Hyperspace Lounge, a Toy Story splash pad where the kids get to rule to the playground, and both Frozen and Marvel dining experiences for all Guests to enjoy.

What do you think of this all-new Tangled-inspired salon experience on the Disney Wish?