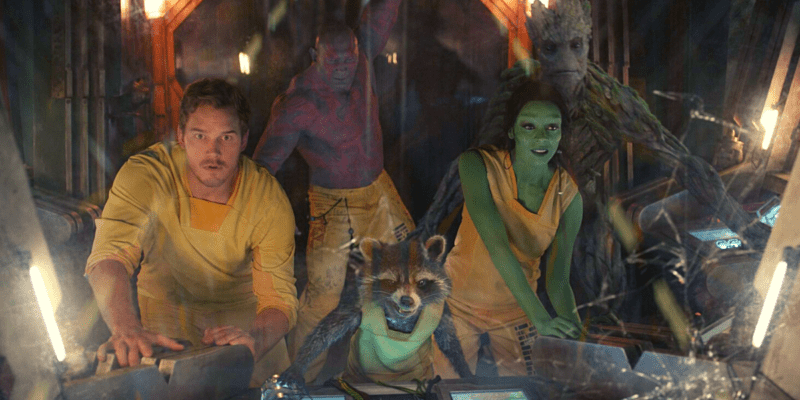 Depending on whose Twitter account you follow, Guardians of the Galaxy Vol. 3 filming is either underway or very close to Day 1. Perhaps it’s a matter of semantics, as director James Gunn explained, clearing up some confusion involving Tweets from lead actor Chris Pratt — and his totally sweet sideburns.

Peter Quill/Star-Lord actor Pratt shared a video via the Team CoCo Twitter account plugging an episode of the Parks and Recreation podcast entitled Parks and Recollections. The actor’s showing off of his robust ‘burns may have been directly responsible for the rumor that Guardians of the Galaxy Vol. 3 is already shooting. In the video, Pratt begins by sharing what he’s up to, saying:

“I’m on the set of Guardians of the Galaxy Vol. 3. This is day 1. That’s why these [sick] mutton chops are back, pretty sweet. I’m very excited to be here…”

While not responding directly to Pratt’s announcement, director James Gunn later took to Twitter to let everybody know that Guardians of the Galaxy Vol. 3 is not quite ready to begin shooting for Marvel Studios. Gunn shared:

“Despite rumors to the contrary, we haven’t started shooting #GotGVol3 yet (but we are pretty close).”

Despite stories to the contrary, we haven't started shooting #GotGVol3 yet (but we are pretty close).

Pratt, seemingly, was referring to camera testing on set, while many fans took his video to mean that principal filming had begun, which is not, apparently, the case. As Inside The Magic previously reported, Gunn attributed Pratt’s announcement of “Day 1” for Guardians of the Galaxy Vol. 3 to the star’s camera tests and related preliminary work separate from official Marvel Studios shoot dates.

When Marvel fans began responding to Gunn’s Tweets, one Twitter user, Rich, used the opportunity to ask for an update on the Walt Disney World EPCOT roller coaster, Guardians of the Galaxy: Cosmic Rewind — due to open sometime in 2022. When asked, “James, are you working on Cosmic Rewind at EPCOT?”, Gunn answered,

“Yep. That we HAVE started shooting.”

Yep. That we HAVE started shooting. https://t.co/WLNQPr1YoU

The Guardians-themed roller coaster in EPCOT will be the second such attraction in a Disney Park to feature the likes of Star-Lord, Groot, Drax, Rocket Raccoon and Gamora after the reimagining of the Hollywood Tower of Terror in Disney California Adventure Park in Disneyland. It will be the first ride based on a Marvel Studios property in Florida’s Walt Disney World Resort.

Related: Does Disney Genie Offer Refunds? Here’s What We Know So Far

The area surrounding the Cosmic Rewind roller coaster will be a Xandar pavilion — similar to the country pavilions found in EPCOT’s World Showcase. Xandar is a planet featured in the Guardians of the Galaxy series, and the themed environment will take Disney World’s Guests to EPCOT’s first “OTHERworld Showcase.”

As Marvel Studios recently announced a major reshuffling of their release dates for much of 2022 and 2023, it looks like the Guardians of the Galaxy Vol. 3 release date is, as now, not impacted. The film from James Gunn is scheduled to hit theaters on May 5, 2023, and will return cast Chris Pratt (Star-Lord), Zoe Saldana (Ganora), Dave Bautista (Drax), Bradley Cooper (Rocket Raccoon), Vin Diesel (Groot), Pom Klementieff (Mantis), and Karen Gillan (Nebula).

James Gunn will also film The Guardians of the Galaxy Holiday Special — still due to hit Disney+ in December 2022 — concurrently with the filming of Guardians Vol. 3.

This week, Marvel Studios pushed back the release dates of of many movies, including Doctor Strange in the Multiverse of Madness (May 6, 2022), Thor: Love and Thunder (August 7, 2022), and Black Panther: Wakanda Forever (November 11, 2022), and The Marvels (February 17, 2023). Marvel is still on track to release the upcoming films on their originally announced dates, Eternals — opening November 5, 2021 — and Spider-Man: No Way Home — hitting theaters December 17, 2021.

What is Guardians of the Galaxy: Cosmic Rewind?

Despite the confusion surrounding Guardians 3 shoot dates, Disney Parks fans are happy to get some good news out of the confusion! The exciting new attraction promises the “…first ever reverse-launch on a Disney coaster” and “…one of the longest enclosed coasters in the world!” Along with the James Gunn-directed scenes of the original Guardians cast, the ride will also feature a roller coaster ride vehicle that rotates 360 degrees!

Disney describes the adventure on Guardians of the Galaxy: Cosmic Rewind as:

Are you excited to spin 360 degrees on Guardians of the Galaxy: Cosmic Rewind in Walt Disney World Resort’s EPCOT? Let us know in the comments!

Comments Off on Despite Marvel Delays, ‘Guardians’ Stars “Have Started” Filming For EPCOT Coaster