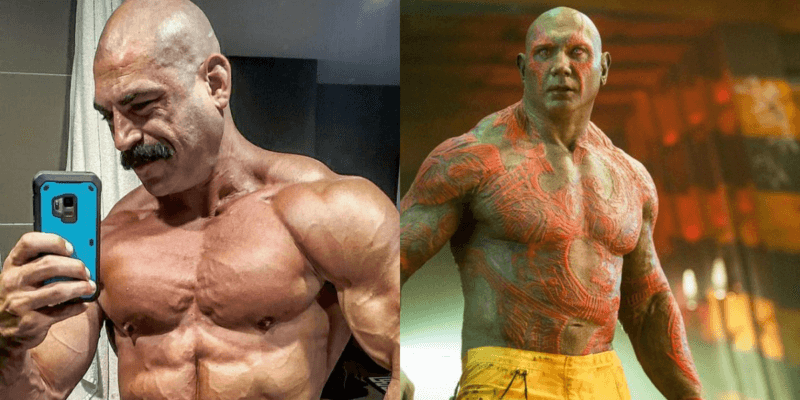 With Dave Bautista set to give up going shirtless for his Guardians of the Galaxy role, Drax the Destroyer, Young Rock‘s Brett Azar is ready to take his place as Drax in the Marvel Cinematic Universe.

As Dave Bautista has been out promoting his hit Netflix movie, Zack Snyder’s Army of the Dead (2021), the future of his iconic role as Marvel’s Drax the Destroyer has naturally been a hot topic among interviewers. While Bautista continues to demonstrate his love for Marvel’s Guardians of the Galaxy cast and director James Gunn, he’s made it clear he is over being Drax — citing his age, the endless hours in the makeup chair, and, what he calls a missed opportunity by Marvel Studios to further explore Drax’s backstory.

34-year-old actor Brett Azar has a lot of potential as a replacement for Dave Bautista in future Guardians of the Galaxy projects. He’s a physically imposing actor who has been a double for action movie legend — and father-in-law to Star-Lord actor Chris Pratt — Arnold Schwarzenegger. On Dwayne Johnson’s bio Young Rock he plays a young Iron Sheik in a portrayal that’s both physically demanding and comedically pitch-perfect.

Fans of the Marvel Cinematic Universe have certainly come to expect the role of Drax to be both physical and hilarious, two qualities Dave Bautista embodied perfectly, though he came to somewhat resent Drax’s continued use as comedic relief, telling Collider,

“…you look at [Drax] and he looks terrifying, but Drax gets his a** kicked more than any other Marvel character… The whole “Destroyer” thing they just threw that out the window…people just fell so in love with the comedic side of Drax they tapped into that, then they tapped into it more, then they really dug a hole into it.”

Brett Azar hasn’t shied away from his comedic character in Young Rock, and it looks like he’s ready to continue to put his comedic timing to the test by taking on a Marvel fan-favorite role should he be given the opportunity.

While Guardians reinstated director James Gunn has said he doesn’t feel anybody can replace Dave Bautista as Drax, original Drax creator Jim Starlin feels the role could be recast if the right actor comes along. The legendary comic book writer who dreamt up Marvel Comics fan favorites like Shang-Chi, Thanos, Gamora, and Drax the Destroyer and wrote comics that inspired many of the Avengers films, recently told Inverse,

“The Marvel Universe is going to keep trucking along and they found that they have made money on cosmic stuff, so they will more than likely are going to do more of it. There may be another Drax down the line — somebody else who hopefully has half the comedic timing of Bautista.”

Audiences still have a few more chances to learn more about Drax’s backstory and his extremely personal beef with Thanos (Josh Brolin). Dave Bautista will return to the role of Drax the Destroyer in Marvel’s Guardians of the Galaxy Vol. 3 (2023) along with returning castmates Chris Pratt (Peter Quill), Zoe Saldana (Gamora), Vin Diesel (Groot), Bradley Cooper (Rocket Raccoon), Karen Gillan (Nebula), and Pom Klementieff (Mantis). The Guardians are also slated to appear in the recently wrapped Thor sequel Thor: Love and Thunder (2022), as well as The Guardians of the Galaxy Holiday Special (2022) for Disney+.

Do you think Young Rock‘s Brett Azar would make a great Drax in the Marvel Cinematic Universe? Let us know in the comments!