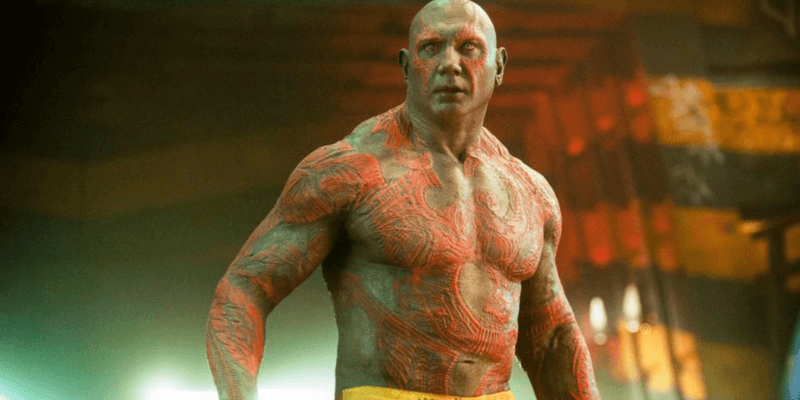 Production is slated to begin later in 2021 on Marvel’s Guardians of the Galaxy Vol. 3 (2023). While the core cast is expected to return for the Guardians sequel, Drax actor Dave Bautista says Guardians 3 is his last go-round in the Marvel Cinematic Universe.

He claims he came to this decision, in part, because he’s just getting too old to take off his shirt.

Apparently, the former WWE star feels Marvel fans are seeing too much of Drax — even when he’s standing so incredibly still.

In a recent appearance on the daytime talk show Ellen, in promotion of his new film, Zack Snyder’s Army of the Dead (2021), actor Dave Bautista said it’s getting more difficult to look like the MCU’s Drax of the original Guardians of the Galaxy (2014) as the years go on. Lamenting the difficulty of staying in peak physical condition into his 50s, Bautista commented,

“I’m going to be 54 years old by the time Guardians 3 comes out, and the shirtless thing is getting harder and harder for me… the journey has come full circle and I’m just ready to kind of step aside and wrap it up.”

Bautista’s Drax has appeared shirtless in nearly every scene he’s filmed as part of the Marvel Cinematic Universe. Whereas Mark Ruffalo’s Hulk gets the benefit of CGI pecs and abs, Dave Bautista has only hours and hours worth of makeup application to hide behind. Even other Marvel actors who’ve appeared shirtless in the MCU like Captain America (Chris Evans), fellow Guardian Star-Lord (Chris Pratt), and Thor (Chris Hemsworth) only go bare-chested for a scene or two at most — a luxury Bautista never enjoyed as Drax.

Guardians of the Galaxy 3 was originally supposed to begin filming in 2019 before director James Gunn was removed from the project by Marvel Studios after offensive Tweets of Gunn’s surfaced. Not long after that time, James Gunn re-entered the good graces of Disney and Marvel Studios. He is writing and directing the third installment of Marvel’s Guardians, and says this one will be his last.

Who knows? The delay in production for the Guardians threequel may have robbed Marvel fans of some of Bautista’s last remaining shirtless years.

While Bautista has always expressed respect and admiration for director James Gunn and his Guardians of the Galaxy castmates, this isn’t the first time the actor has indicated that he is over Drax the Destroyer. In a recent interview, Bautista revealed that he felt Marvel Studios really missed an opportunity to explore Drax’s backstory — opting instead to use the hulking character as comedic relief. Speaking to Collider, Bautista explained,

“…you look at [Drax] and he looks terrifying, but Drax gets his a** kicked more than any other Marvel character… The whole “Destroyer” thing they just threw that out the window…people just fell so in love with the comedic side of Drax they tapped into that, then they tapped into it more, then they really dug a hole into it. But we missed a huge boat on that character and I don’t think it’ll ever come back around.”

Bautista will pop his top off to play Drax the Destroyer a few more times before retiring his portrayal of the Marvel fan-favorite. Drax will appear in the hotly anticipated Phase 4 Marvel film Thor: Love and Thunder (2022) which began filming in late 2020 with Thor: Ragnarok (2017) director Taika Waititi returning to helm the sequel starring Chris Hemsworth. Dave Bautista will then appear in Guardians of the Galaxy Vol. 3 — scheduled to premiere May 5, 2023 — as Drax for the very last time.

Do you think Drax should stick around the Marvel Cinematic Universe for a few more outings? Let us know in the comments!