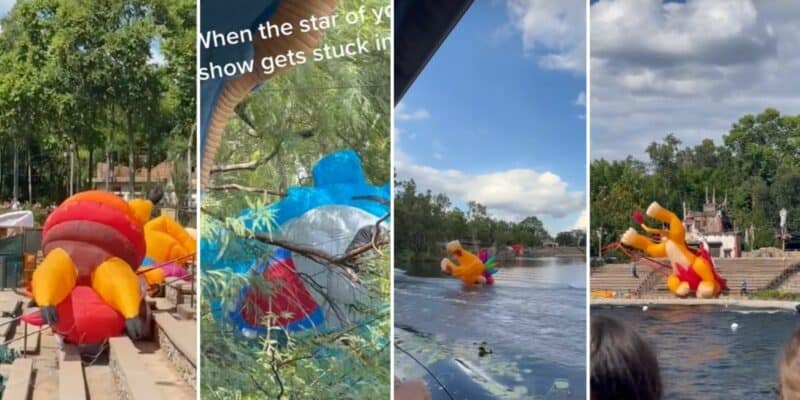 Nowadays, phrases like “going viral” and “TikTok famous” are thrown around pretty frequently. With immediate access to social media, events can be captured and shared with audiences across the globe. Amid the Walt Disney World Resort’s 50th anniversary celebration, a surprising new addition has been making waves online.

When the Central Florida Disney Resort began The World’s Most Magical Celebration last week, October 1, it marked a momentous occasion in Disney Parks history. Opening in 1971 with the Magic Kingdom and hotels like Disney’s Contemporary Resort and the Polynesian Village Resort, the 50th anniversary celebrates Disney magic over the years by debuting new nighttime spectaculars like Disney Enchantment at Cinderella Castle and Harmonious at EPCOT. The latter also opened Remy’s Ratatouille Adventure!

There really is something for everyone while on their Disney vacation during the celebratory event. Disney’s Hollywood Studios recently debuted a standby queue for Star Wars: Rise of the Resistance for the first time ever meaning all Guests get a chance to experience the fan-favorite attraction. Those looking to visit multiple parts of Disney World can also take advantage of Park Hopper hours with their theme park ticket and Disney Park Pass reservation system.

But, for Guests visiting Disney’s Animal Kingdom, why would you want to leave?

Disney KiteTails previewed just shortly before October 1, and even then Disney fans became immediately concerned over the new daytime show. Taking place over the waters of Discovery River Theater at the Disney Park, KiteTails brings characters from The Jungle Book (1967) and The Lion King (1994) to life in an aerial experience complete with a Disney soundtrack. In theory, the show sounds completely fitting for the animal-centric Orlando theme park, but in reality, the show has become a viral sensation, arguably, for all the wrong reasons.

Many Guests have taken to TikTok to share moments from the show, along with various sound bites and captions. As of right now, the KiteTails hashtag on the popular video-sharing app has almost 4 million hits. Let’s take a look at how the daytime show has gone viral over the past week.

PagingMrMorrow (@pagingmrmorrow) shared a video of Simba taking flight then immediately crash-landing in the water before being dragged back to the launch platform.

In all honesty I love this show!

One user commented: “Plot twist. It’s so bad it becomes the most popular show in Disney World”.

In another significant mishap, Disney fan-favorite Baloo soared right into a tree near the viewing area. The Tragic Kingdom (@thetragickingdom) shared:

And while the kites of Disney KiteTails are meant to land in the stands, fans have used popular memes like Sarah Paulson’s American Horror Story quote to further add hilarity to the show.

Here you have it

Here you have it #kitetails #disney

And again, it’s not the most magical of landings. Twitter user @melschnef caught this clip of Pumbaa:

Captured but minutes ago

captured but minutes ago pic.twitter.com/dKLg8bHa1Q

One fan stated that the only way to “fix” Disney KiteTails was to get Owen Wilson involved. Stranger things have happened…

The World’s Most Magical Celebration continues for the next 18 months. With the Beacons of Magic now lighting up each Park, new “EARidescent” costumes for Disney characters like Mickey Mouse, and merchandise in the Parks and at Disney Springs (including that Starbucks tumbler), the 50th anniversary is now in full swing.

However, there is certainly more to come. Disney Genie and new FastPass replacement Disney Genie+ will debut October 19 with the premiere of the Lightning Lane and Individual Attraction Selections. And in terms of attractions, Guardians of the Galaxy: Cosmic Rewind will finally debut at EPCOT next year.

Hearts and imaginations will soar as elaborate, 3-dimensional kites and incredible windcatchers dance through the air to the beat of beloved Disney songs during this high-flying performance at Disney’s Animal Kingdom theme park. Be awed by 2 unique, 10-minute shows:

Have experienced Animal Kingdom’s Disney KiteTails on your Walt Disney World vacation yet? Let us know in the comments down below!