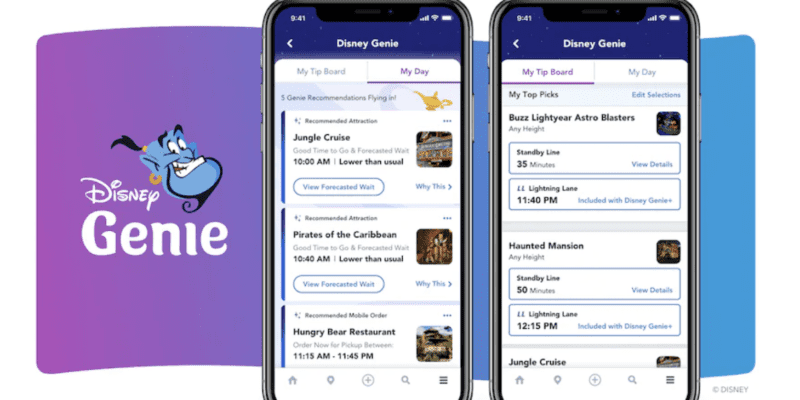 Disney Genie — along with Disney Genie+ and Lightning Lane — will also be making its way to Disneyland Resort, but no start day has been announced yet. All Disney has said is that the program will launch at the Happiest Place on Earth sometime this fall.

Even though we do not have an official start date for Disney Genie and Genie+ at Disneyland, we now know which rides will be a part of Genie+ and which rides will be individual attraction selections — meaning that Guests will have to pay an extra, separate fee to use the Lightning Lane for that attraction.

Can Book One at a Time Throughout the Day

Can Book One at a Time Throughout the Day

At the time of publication, Disneyland officials have not said how much it will cost to purchase Lightning Lane access to Rise of the Resistance, Radiator Springs Racers, and WEB SLINGERS. However, we do know that at Walt Disney World, the prices for individual attraction selections may vary based on the day of the week and the time of the years Guests are purchasing them.

The Disneyland website provides more information on just what the Disney Genie+ service will be:

For the price of $15 per day, per ticket at Walt Disney World Resort and $20 per day, per ticket at Disneyland Resort, choose the next available time to arrive at a variety of attractions and experiences using the Lightning Lane entrance. You can make one selection at a time, throughout the day—from classics like Haunted Mansion to thrill rides like Big Thunder Mountain Railroad and newer favorites like Millennium Falcon: Smugglers Run (attractions subject to limited availability). This convenient option is the next evolution of the fan-favorite Disney MaxPass service from Disneyland Resort. Disney Genie+ will also include Disney parks-themed audio experiences and photo features to capture your memories—unlimited Disney PhotoPass downloads from your day if you are visiting Disneyland Resort.

We do know that Guests wishing to purchase Disney Genie+ when it becomes available at Disneyland will have to pay $20 per day. Disney has not said if Genie+ will become an add-on feature for Magic Key Holders like MaxPass was for Annual Passholders.

Here is some more information on the Disney Genie planning tool that is coming to Disneyland Resort.

Built as a new digital service in the Disneyland app, Disney Genie service will maximize your park time, so you can have more fun. It includes a personalized itinerary feature that will quickly and seamlessly map out an entire day. From specific attractions, foodie experiences and entertainment, to general interests like Disney princesses, villains, Pixar, Star Wars, thrill rides and more—just tell Disney Genie what you want to do and it will do the planning for you.

Again, Disney has not announced a start date for Disney Genie at Disneyland Resort, but we do know that it is coming sometime this fall.

Will you be utilizing Disney Genie and Genie+ when they are launched at Disneyland Resort? Let us know in the comments!