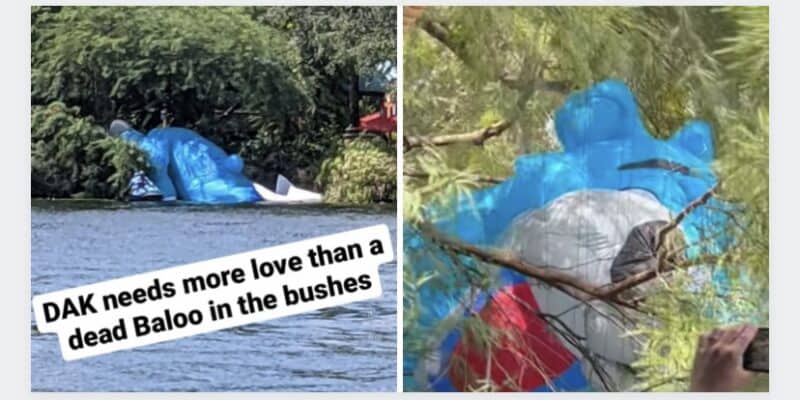 Disney KiteTails is the newest daytime show at Disney’s Animal Kingdom. Despite the creativity and uniqueness of the show itself, it is safe to say it has run into its fair share of issues.

Disney KiteTails officially debuted to Guests yesterday, October 1, in honor of Disney World’s 50th anniversary. However, even though it has only been showing to Guests for two days, another issue has arises.

This afternoon when Guests were visiting Animal Kingdom, during one performance of Disney KiteTails, they noticed that the Baloo kite had a crash landing and ended up stuck in the trees and bushes.

This was shared to TikTok via user TheTragicKingdom, which you can see by clicking here.

Instagram user MontleyKingdom also shared a photo of Baloo stuck in the bushes this afternoon to their Instagram story, which you can see below:

Guests can also add Disney KiteTails into their plans on My Disney Experience, ensuring that you won’t miss out on this unique experience.

The Walt Disney World website describes the upcoming experience as:

Have you seen Disney KiteTails yet? What did you think of the show? Let us know in the comments below.