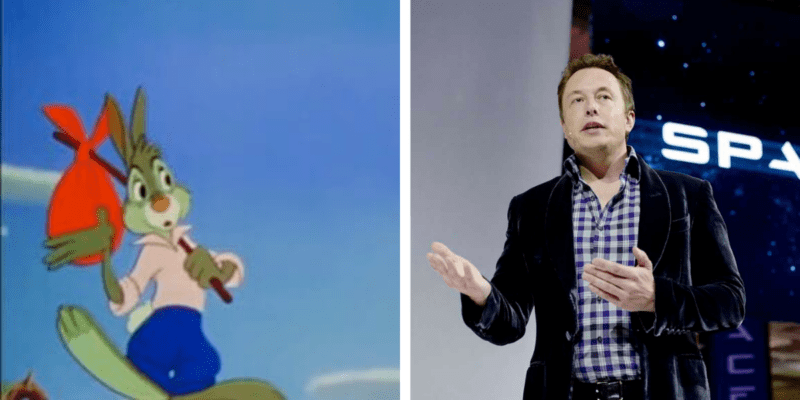 This month, Walt Disney World Resort announced that Splash Mountain in Frontierland at Magic Kingdom would close on January 23, 2023, to make way for Tiana’s Bayou Adventure, its Princess and the Frog (2009) retheme. A closing date for Disneyland Resort’s version of the water ride is expected to be announced soon.

Princess Tiana and friends will replace characters from Song of the South (1946), a film widely banned for its racist portrayal of Black Americans during the Jim Crow era. Despite a dedicated #SaveSplashMountain campaign and even a petition that reached nearly 100,000 signatures, Walt Disney World and Disneyland Resort will say goodbye to this iteration of the decades-old log flume ride.

Still, some Splash Mountain fans are not ready to give up. Earlier this week, a Republican Congressman from Florida defended the ride and fueled the fire on social media, which one particular fan took advantage of. Or should we say one particular rabbit?

A dedicated fan created @BriarPatchz, a Twitter account portraying the main character of Splash Mountain, Br’er Rabbit. The account regularly spreads the #SaveSplashMountain petition and responds to news stories about the ride’s closure.

The account regularly tweets Elon Musk, Florida Governor Ron DeSantis, and other Republican politicians, asking for help saving the water ride. They type in vernacular similar to that used on the ride and refer to everyone as “Br’er:”

If you have a few spare dimes, Brer @elonmusk, could you save Splash Mountain? The other critters and I would much ‘preciate that

If you have a few spare dimes, Brer @elonmusk, could you save Splash Mountain? The other critters and I would much ‘preciate that

They’ve even asked Universal Orlando Resort to give Splash Mountain a home:

Ya’ll got any room for a Briar Patch? Might need a place to stay for a while

Ya’ll got any room for a Briar Patch? Might need a place to stay for a while

While this account is amusing, it’s important to remember that the Br’er characters are primarily based on inappropriate stereotypes of Black Americans. They often use offensive versions of AAVE (African American Vernacular English) and, of course, come from Song of the South (1946). The film is full of harmful stereotypes and whitewashing of the struggles experienced by Black Americans post-Civil War. Overwhelmingly, activists are happy to see Splash Mountain go.

Splash Mountain will soon close at Disneyland Park and Magic Kingdom. The log flume ride will remain the same at Tokyo Disneyland, though the Disney Park recently removed the ride’s anthem, “Zip-A-Dee-Doo-Dah,” from its music loop. From Disney:

Are you excited for Splash Mountain to transform into Tiana’s Bayou Adventure?