Republican Congressman Speaks Out In Support of Splash Mountain, Claims Ride Not Racist - Inside the Magic 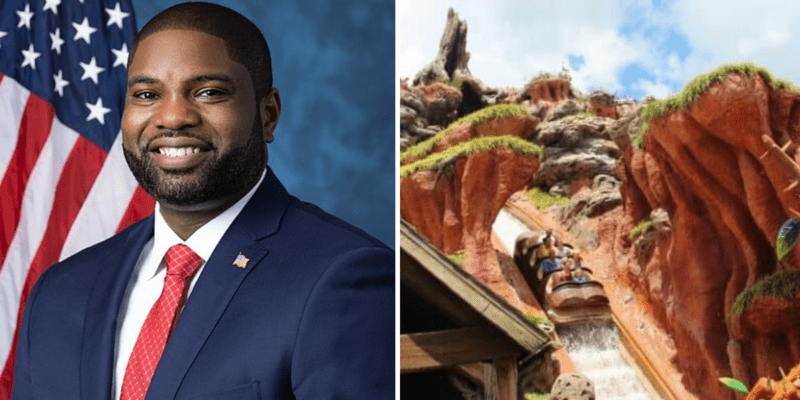 This month, Walt Disney World Resort announced that Splash Mountain in Frontierland at Magic Kingdom would close on January 23, 2023, to make way for Tiana’s Bayou Adventure, its Princess and the Frog (2009) retheme. A closing date for Disneyland Resort’s version of the water ride is expected to be announced soon.

Princess Tiana and friends will replace characters from Song of the South (1946), a film widely banned for its racist portrayal of Black Americans during the Jim Crow era. Despite a dedicated #SaveSplashMountain campaign and even a petition that reached nearly 100,000 signatures, Walt Disney World and Disneyland Resort will say goodbye to this iteration of the decades-old log flume ride.

Still, some Splash Mountain fans haven’t backed down. This week, a Republican politician from Florida joined.

During an interview with Newsmax, Congressman Byron Donalds of Florida’s 19th Congressional District shared his thoughts on the Splash Mountain retheme:

Let me get this straight. Splash Mountain is racist, but Joe Biden saying you’re not Black if you don’t vote for him isn’t??… Cancel Joe, not Splash Mountain!

Let me get this straight.

Splash Mountain is racist, but Joe Biden saying you're not Black if you don't vote for him isn't??…

Donalds said he and his three sons have “been to Splash Mountain so many times” and never considered it racist. He argued that some people “choose to want to be victims” and change things unnecessarily.

The Congressman also criticized The Walt Disney Company as a whole, saying “they’ve lost their minds.”

“It’s really sad to see them not just stand up and be like, ‘No. This isn’t racist. It’s just a part of our Park and kids enjoy it,'” Donalds said. “Look  at the… multiethnic people who come, kids who enjoy it, and nobody’s running around thinking they’re being victimized somehow. I think this is ridiculous.”’

Overwhelmingly though, activists are happy to see Splash Mountain go. The ride and its film are full of harmful stereotypes and whitewashing of the struggles experienced by Black Americans post-Civil War.

Splash Mountain will soon close at Disneyland Park and Magic Kingdom. The log flume ride will remain the same at Tokyo Disneyland, though the Disney Park recently removed the ride’s anthem, “Zip-A-Dee-Doo-Dah,” from its music loop. From Disney:

Are you excited for Splash Mountain to transform into Tiana’s Bayou Adventure?