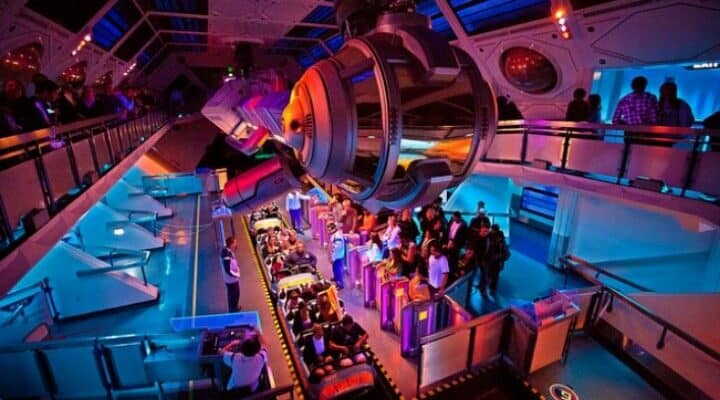 Ahead of the Splash Mountain retheme — the Song of the South (1946) animatronics and sets will be replaced with scenes and characters from The Princess and the Frog (2009) — Disneyland Resort is now reportedly retheming another iconic “mountain,” Space Mountain.

Per a new report about the possible retheme, which has not been confirmed by Walt Disney Company officials at this time:

The rumor suggests that Space Mountain will receive a permanent Lightyear re-theme, which will be announced at D23 this fall. The main basis of this rumor is the use of a structure that looks similar to Space Mountain’s silhouette in Lightyear, which has appeared in promotional trailers. That structure appears to be the launchpad for Star Command that will eventually send Lightyear on his mission to the cosmos.

Early reviews of the computer animated film are divided — some find it to be an excellent addition to the Pixar catalogue, while others are unimpressed with the execution. Some have even vocalized their frustration at Tim Allen not voicing the human version of the character he made famous alongside Tom Hanks’s Woody the Cowboy.

Although Disney hasn’t officially announced anything about a Lightyear retheme of the iconic roller coaster, it wouldn’t be shocking to see more Pixar Animation Studios come to Disneyland Resort.

The theme park property’s second gate, Disney California Adventure Park, is already home to Pixar Pier and the Paradise Pier Hotel is set to receive a Pixar-influenced makeover in the near future as well.

The Disneyland version of Space Mountain, which was designed by Bill Watkins [above], is currently operating as “Hyperspace Mountain.” This Star Wars-inspired take on the iconic ride — which can also be found at Disneyland Paris — is described as:

Rocket Right onto the Battlefield
Fend off crossfire from swarms of Rebel X-wing starfighters and Imperial TIE fighters amidst an intergalactic onslaught!

The normal version of the ride is expected to reopen on July 5, 2022. Space Mountain is described as:

Do you think a Lightyear retheme would be good for Space Mountain’s popularity?