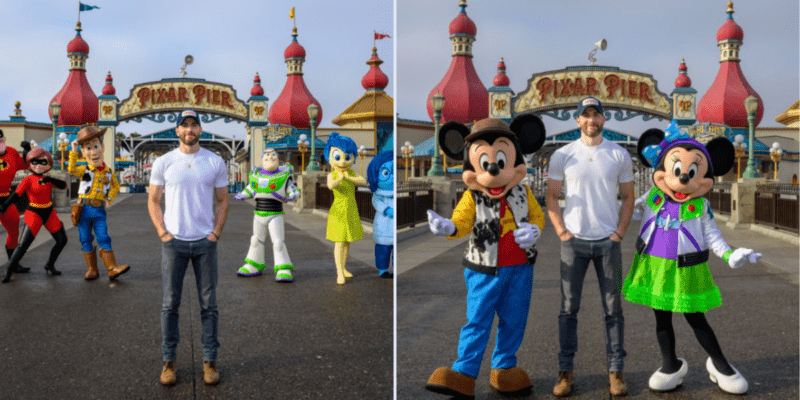 This week, Evans made a special appearance at Pixar Pier at Disney California Adventure at Disneyland Resort. Pixar shared two photos of Evans with Mickey and Minnie (dressed in Woody and Buzz Lightyear costumes), as well as Mr. and Mrs. Incredible, Joy, Sadness, Woody, and Buzz Lightyear:

Evans has posed precisely the same in both photos, hands inside his pockets and confidently smiling at the camera. Some Disney fans joked that he looked photoshopped in.

Today, Evans took to Twitter to respond to the allegations:

(And I don’t know what to do with my hands)

(And I don’t know what to do with my hands) https://t.co/oiVadwg3s7

Fans responded with other photos of Evans at red carpet events in similar poses, agreeing that the star does have a “very disciplined pose.” @arigcevans wrote:

what do you mean by “very disciplined pose”? we’ve never noticed

what do you mean by “very disciplined pose”? we’ve never noticed pic.twitter.com/B27J39OSEz

Head to your favorite movie theater on June 17 to see the premiere of Pixar’s Lightyear, starring Chris Evans and directed by Angus MacLane. From Disney:

Are you excited about Lightyear? Let us know in the comments.