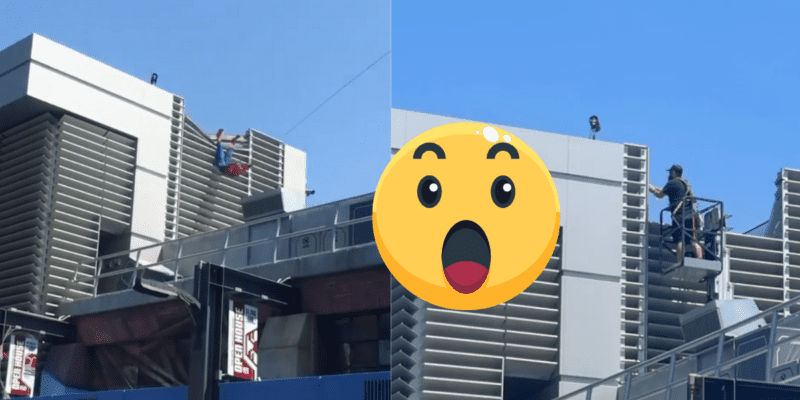 The show often elicits gasps from Disneyland Resort Guests, who aren’t expecting the Spider-Man performer they just watched to soar through the air. (Little do they know, their favorite superhero has been swapped for a robot!)

In the clip, you can see Spider-Man fly off the building in Avengers Campus as usual, but the animatronic appears to have a cable stuck to it. Typically, Spider-Man soars through the air with no strings – or webs – attached.

Instead of falling behind the building, the stunt animatronic crashes into the building, crushing a section of the wall. You can hear gasps in the crowd.

Another Instagram account, @entertainmentconnection, shared this photo of a maintenance Cast Member working on repairing the building this afternoon.

This video shows the way the Spider-Man Stuntronic is supposed to fall at the Disney Park:

It’s unclear if there was any damage to the Spider-Man Stuntronic after this incident. Disneyland’s website and mobile app both show multiple showtimes for The Amazing Spider-Man! at Avenger’s Campus and has not officially cancelled any upcoming performances.

Watch as your friendly neighborhood Spider-Man tests new enhancements to his Spidey suit on top of the WEB SLINGERS: A Spider-Man Adventure building.

If you’re looking for more Spider-Man fun at Disneyland Resort, you don’t have to go far. WEB SLINGERS: A Spider-Man Adventure is an all-ages dark ride with no height limit so the entire family can join the fun. From Disney:

Have you ever seen the amazing Spider-Man Stuntronic at Disneyland Resort? Let us know in the comments.