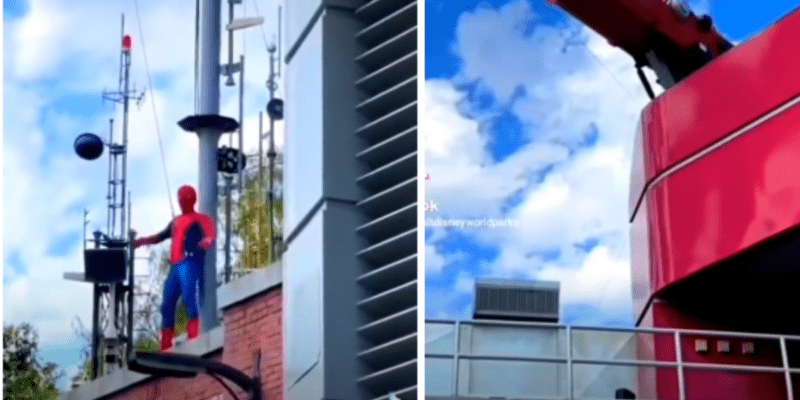 Even Spider-Man can miss a cue or a jump every now and then.

Disneyland Resort’s WEB SLINGERS: A Spider-Man Adventure, located at Disney California Adventure Park, is one of the two attractions at the Park that are only available through a-la-carte Lightning Lane purchase. The other is Radiator Springs Racers.

Guests who choose to embark on the attraction are treated to an immersive experience where they aid in helping Spider-Man stop rampaging robots that are wreaking havoc across Avengers Campus.

While the ride itself is amazing, that doesn’t mean every time is a flawless effort. TikTok user @waltdisneyworldparks recently posted a video that has since had more than 4 million views of a malfunction on the WEB SLINGERS: A Spider-Man Adventure stunt attraction.

As you can see in the video, Spider-Man is supposed to sling high in the air and land on top of the building, but unfortunately he did not fly. Instead, we hear a message to Spider-Man read aloud about current conditions and how a flight is not suggested and then he reappears in what would be his next spot.

Just recently, a Disney Guest claimed their wait for the popular attraction was double that of the posted wait time.

What was your experience like on WEB SLINGERS: A Spider-Man Adventure? Let us know in the comments.