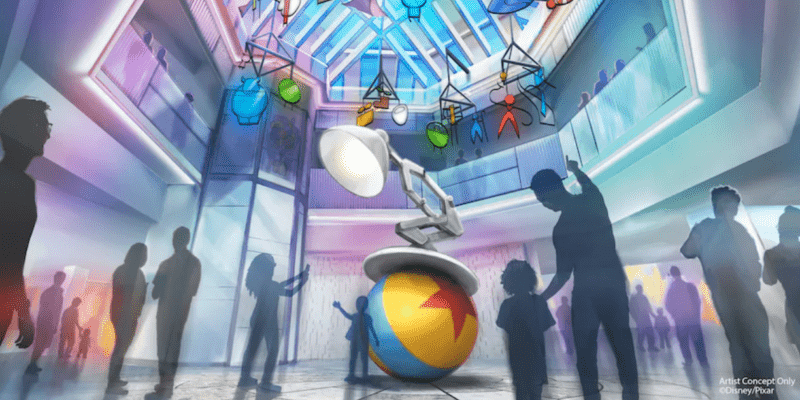 Disney has just announced that the fan-favorite hotel, Disney’s Paradise Pier Hotel, located in Disneyland, will soon get an all-new theme!

Disney’s Paradise Pier Hotel in Disneyland Resort is a fan-favorite hotel, themed to the California beachfront boardwalks. Disneyland currently describes the hotel as:

Soon, however, the California beachfront theming will wash away as Disney announced the hotel will undergo a revamp and will include an all-new Pixar theme!

As seen in the concept art above, Paradise Pier will soon include Pixar theming elements, including the iconic Pixar balls seen in various films.

Additionally, the new Pixar-themed hotel will include the Pixar Lamp as the center of the lobby, as seen in the concept art above. Disney Parks Blog shared:

Guests will be welcomed into whimsical character moments, like the iconic, playful Pixar Lamp balancing atop its ball in the lobby (as pictured in this artist concept rendering). Stay tuned, as we will share much more about this project soon!

At this time we do not know what the new hotel’s name will be, or when this revamp will be taking place, but Inside the Magic will update you as we get information.

Other exciting news at the Disneyland Resort includes upgrades coming to the shopping and dining district, Downtown Disney. As previously announced by D23, the multi-year project to reimagine Downtown Disney District is being planned with work starting in January 2022 and will include an even broader collection of shopping, dining & entertainment experiences. Now, we have more details surrounding the project, which you can read more about here.

How do you feel about Paradise Pier getting a retheme? Let us know in the comments below.