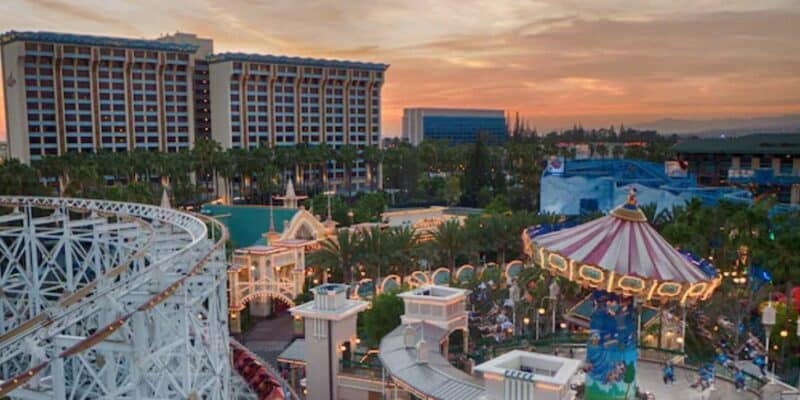 After a day visiting the many lands of Disneyland Park or Disney California Adventure or a night of food and drinks at the Downtown Disney District, Guests staying on Resort property can relax at the Disneyland Hotel, Disney’s Grand Californian Hotel & Spa, or Disney’s Paradise Pier Hotel.

The latter has already been through many changes over the years. Formerly the Emerald of Anaheim, Disney purchased the hotel in 1995, where it later became the Disneyland Pacific Hotel and then eventually Disney’s Paradise Pier, with theming similar to Disney California Adventure Park that it overlooks. According to a new report, Paradise Pier is set for another retheme that will leave Walt Disney Imagineering bringing Andy’s famous toys into a Guest’s Disney vacation like never before.

We have learned from sources at the Disneyland Resort that the hotel is getting a retheme to Pixar’s iconic Toy Story franchise. It’s still in the very early stages, but we hear cast members were notified Tuesday of the decision.

The move is not shocking as the resort is continuing to add Pixar amongst its theme park roster. Toy Story Mania is the staple of Pixar Pier and Paradise Pier has needed an overhaul for years now.

It is worth noting that these reports have not officially been confirmed by The Walt Disney Company or Disneyland Resort officials. However, the rumor holds weight after leaked concept art of a proposed Toy Story-themed hotel surfaced just weeks ago.

The addition of a completely themed Disney hotel experience would allow Guests even more choice when visiting and staying at Walt Disney’s first theme park. Similar to other Disney Resorts, Disneyland in Anaheim does not have an exclusively themed hotel experience. With the iconic Toy Story characters of Andy’s Bedroom allegedly taking over Paradise Pier, it would add another dimension to the Disney Resort and alternative to Disneyland Hotel and Disney’s Grand Californian Hotel & Spa.

The retheme of Disney’s Paradise Pier hotel, if it came to fruition, would mark yet another massive overhaul for Disneyland Resort. The Parks are currently amid a major transformation of Mickey’s Toontown at the Disney Park, while beloved attractions like Tarzan’s Treehouse at Disneyland Park’s Adventureland are set for a retheme in the near future.

Disneyland Resort’s renovations, refurbishments, and rethemes come in the wake of the Park President Ken Potrock stating that the Resort was looking to “quickly infuse” Intellectual Properties (IP) across Disneyland Park, Disney California Adventure, and the Downtown Disney District — such as the upcoming Star Wars: Hyperspace Mountain overlay of the Disney Genie+ attraction, Space Mountain and the already established Avengers Campus.

While a complete Disney hotel retheme is by no means a quick infusion, it does align with the direction that Disney Parks are seemingly heading towards.

The potential retheme of Disney’s Paradise Pier Hotel may come as a shock to some diehard Disney fans but a welcome addition to others. It won’t just be the West Coast that incorporates Pixar into its hotel catalog. Last year saw Disney’s Contemporary Resort at the Walt Disney World Resort in Orlando, rather divisively, add theming reflective of The Incredibles (2005) to its rooms.

Would you like to see Disney’s Paradise Pier Hotel rethemed to Toy Story? Let us know in the comments down below!