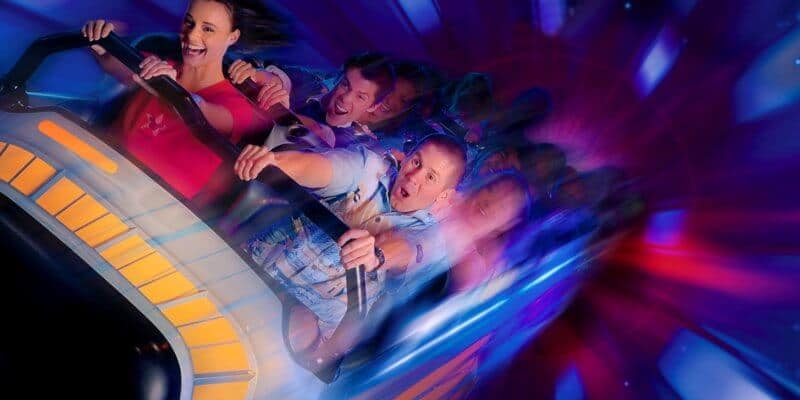 The Happiest Place On Earth will be getting a “new” attraction this year when Hyperspace Mountain takes over Tomorrowland’s Space Mountain at Anaheim’s Disneyland Resort.

The thrill ride will close to Guests on April 28, 2022, and reopen a day later on April 29 with the Star Wars-themed overlay at the Disney Park. And fans are pressed.

Space Mountain is one of Disney Parks’ most popular and iconic attractions. Appearing in theme parks all over the world including Disneyland Resort, Walt Disney World Resort, and Disneyland Paris, the dark ride has been a staple for Guests for many, many years.

At Disneyland Park in Southern California, Space Mountain can be found in Tomorrowland along with other “futuristic” attractions like Astro Orbitor, Autopia, and Buzz Lightyear Astro Blasters. The classic mountain is a fan-favorite destination for Park Guests and recently became one of the theme park’s Disney Genie+ options when the new interactive service, Disney Genie, launched last December.

In an interesting turn of events, Disneyland has announced that Space Mountain will once again receive its Star Wars overlay, Hyperspace Mountain, this April. In anticipation of the “Star Wars Extravaganza”, Disneyland After Dark: Star Wars Nite, which is running May 3, May 4 (May the Fourth/Star Wars Day), and May 27, the ride will change for a limited time — although an end date is not known at present. General Admission is sold out.

The Hyperspace Mountain overlay has been to Disneyland Park before, first appearing in 2015, and again in 2016, 2018, and 2019. But, despite it being a longstanding tradition to switch up Space Mountain (the attraction has also been Rockin’ Space Mountain and Space Mountain: Ghost Galaxy), many fans have denounced the Star Wars retheme. Commenting on Inside the Magic’s announcement article, fans discussed the change.

LEAVE SPACE MOUNTAIN ALONE. DID ENOUGH DAMAGE WHEN YOU REPLACED A FANTASTIC RIDE AND REPLACED IT WITH A FROG […] LEAVE WELL ENOUGH ALONE..

Yawn, Star Wars has has [sic: had] its own land now and soon a hotel… why the heck do they need to hyperspace Space Mountain. Why not oh I don’t know how about adding Hubble space telescope images and make it really Space Mountain

The Star Wars land, Star Wars: Galaxy’s Edge, opened on May 31, 2019, at Disneyland Park in Anaheim, bringing the Black Spire Outpost of Batuu to the Resort for Guests to experience while on their Disney vacation. Star Wars: Galactic Starcruiser opened this month at Walt Disney World Resort, Orlando.

The reinstallation of Hyperspace Mountain at Disneyland Park comes just weeks after Disneyland Resort President Ken Potrock stated that the Parks were to “quickly” infuse Intellectual Properties (IP) across experiences and attractions at Disneyland Park and Disney California Adventure. The Tomorrowland ride will be updated to tell a story from a galaxy far, far away when Admiral Ackbar needs Guests to help the Rebel Alliance combat a fleet of Imperial forces.

Overlays and new builds including brands like Marvel and Star Wars are becoming the norm at Disney Parks. At Disneyland Resort alone, Marvel already took over the classic Tower of Terror attraction, becoming Guardians of the Galaxy — MISSION: Breakout!, before an entire Marvel land, Avengers Campus, opened at Disney California Adventure Park last year. And at Walt Disney World, the next couple of years will see Guardians of the Galaxy: Cosmic Rewind open at EPCOT and a TRON coaster at Magic Kingdom.

What are your thoughts on Hyperspace Mountain returning? Let us know in the comments down below!