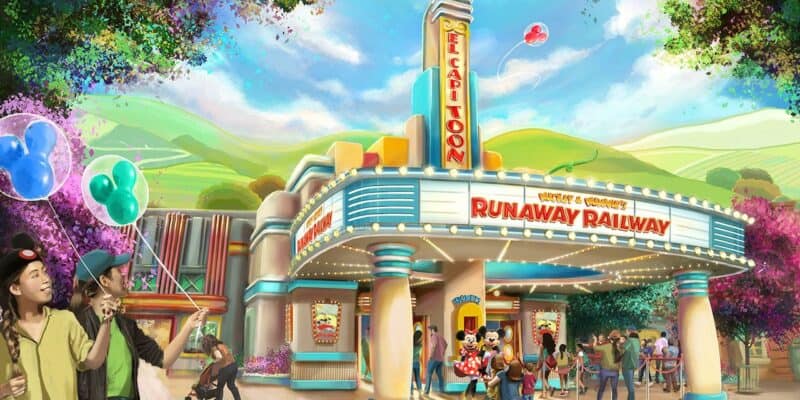 One of Disneyland Resort’s most popular lands, Mickey’s Toontown, will close next month. While the closure of the cartoon-themed location is a shame for Guests visiting Disneyland throughout 2022, the excitement of the new offerings launching when it reopens are sure to tide fans over.

Joining the Park’s ride portfolio when Toontown reopens will be Mickey & Minnie’s Runaway Railway, as announced in 2019. Disneyland President, Ken Potrock, just revealed it will be an “enhanced” version of the one found at Disney’s Hollywood Studios in Walt Disney World.

Disneyland is the home to many popular lands. From Disneyland Park’s Critter Country and Main Street, U.S.A., to Fantasyland and Star Wars: Galaxy’s Edge, the Disney Resort is home to many themed locations giving Guests a well-rounded Disney experience. Not to mention places like Avengers Campus at the Resort’s other Park, Disney California Adventure Park.

Interestingly, despite Disney Parks already having a fairly new and operating version of Runaway Railway at Disney’s Hollywood Studios, recent comments from the President of Walt Disney’s first Disney theme park had some intriguing things to say about the new attraction.

Looking at that land as an opportunity to really improve upon the experience for families with younger kids is a big objective of ours. It’s going to become much more interactive. It’s going to have much more park space to picnic, sit in the grass and for kids to run around. That’s going to be a really special place for us here at the resort.

Potrock went on to reveal that the upcoming Mickey and Minnie’s Runaway Railway attraction at Disneyland’s Toontown will be different than the one found on the other coast in Walt Disney World, Florida. He said:

We’re working really hard on making Mickey and Minnie’s Runaway Railway a fabulous attraction. It’s in Florida already and it’s going to be even better here because it has some enhancements that Florida doesn’t have.

Disney World’s attraction made history when it replaced The Great Movie Ride at the Grauman’s Chinese Theater replica on Hollywood Boulevard, becoming the first ride at any Disney Park to feature Mickey Mouse and friends.

Disneyland Resort’s own Mickey & Minnie’s Runaway Railway will also take place inside a theater. A play on the Disney-owned Hollywood theater, El Capitan, the new dark ride will reside at the El CapiTOON Theater inside the reimagined Mickey’s Toontown.

As announced in 2019, prior to Guests seeing Mickey and Minnie’s newest short, “Perfect Picnic”, they will “experience a special exhibit created by the Toontown Hysterical Society featuring costumes and props from the toon world.”

Mickey’s Toontown will close on March 9, 2022, with no reopening date currently set. Mickey & Minnie’s Runaway Railway is set to debut with the land’s return to Disneyland Resort.

What do you think these enhancements will be? Let us know in the comments below!