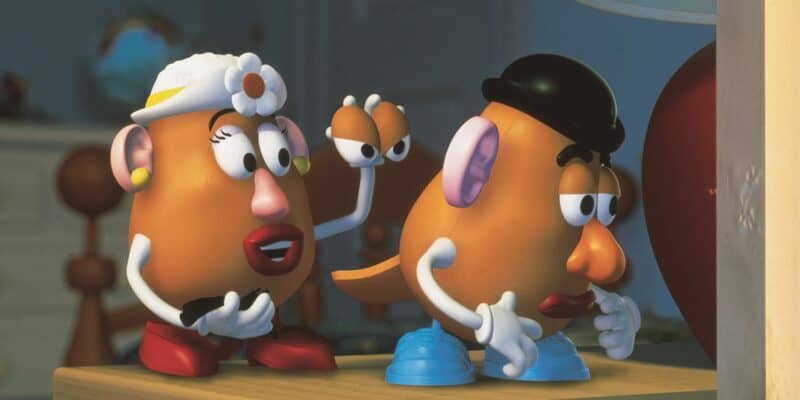 When it comes to Disney, although many of their live action films are full of magic and wonder, the nostalgia of all of the movies that many of us fans have grown up to fall in love with comes from the voices that have created many of these characters. From the voices that encapsulate Beauty and the Beast, The Little Mermaid, The Lion King, Snow White, Sleeping Beauty, Aladdin, and so many more, many of us can recognize any character’s voice when we hear it.

Toy Story is another Pixar franchise owned by Disney that so many of us have grown up watching. The film is flooded with characters like Woody and Buzz Lightyear, and after years of movies, they all reign as iconic to Disney fans. So, that is why it is tragic to announce that one of those voices has passed away.

Estelle Harris has been known for many roles, such as George’s mother Estelle Costanza on Seinfeld, but, for many Disney fans, her role as Mrs. Potato Head has always been a fan-favorite. At the age of 93, it has now been reported that Estelle has passed away due to natural causes. The death was confirmed on April 2, 2022.

Variety went on to note:

She also had a robust voice career, anchored by her work as Mrs. Potato Head in the second, third and fourth chapters of the “Toy Story” series. Channelling the verve of her “Seinfeld” role, she had a loving and nagging relationship with Mr. Potato Head, perfectly voiced by Don Rickles. From there, she popped up in many animated projects large and small, including films such as “Brother Bear” (2003) and “Tarzan II” (2005) and series like “Hercules,” “The Wild Thornberrys” and “Godzilla: The Series” (all from 1998).

Estelle also appeared on the hit Disney Channel series The Suite Life of Zack and Cody.

Of course, Toy Story would have not been complete without Estelle’s iconic voice work. Below, you can read more on the franchise as noted by Pixar Wiki.

The synopsis of the film is as follows:

Set in a world where toys come alive, the world’s first computer-animated movie focuses on the toys of Andy Davis and centers on his favorite toy, a pull-string cowboy doll named Woody, worrying about being replaced by Andy’s newest toy, a space ranger named Buzz Lightyear. When Woody and Buzz are suddenly trapped in the house of Andy’s toy-killing neighbor Sid Phillips and his vicious dog Scud, they must work together to escape if they ever want to return to Andy’s house.

Now, Mrs. Potato Head can live on through Andy’s backyard at Disney’s Hollywood Studios, where the franchise of Toy Story has come to life! Estelle now joins the late Don Rickles, who played Mr. Potato Head in Toy Story, and passed away in 2017.

What was your favorite Mrs. Potato Head moment?