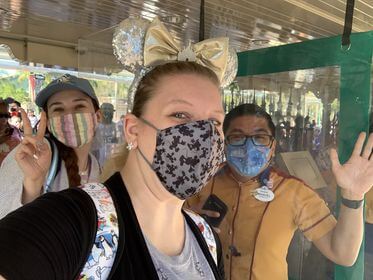 It has been an extremely emotional day for Disney fans! Disneyland and California Adventure Park are officially open today after their year-long closure.

The outpour of excitement from Disney Guests and Cast Members today has been the buzz all over social media. Currently, Inside the Magic is celebrating inside Disneyland Park and is joining in on all the Disney fun! Here we share just some of our favorite Disney fans’ reactions to the reopening of Disneyland Park.

Disneyland Park is BACK!

Emotions were running rampant as thousands of Disney theme park goers waited patiently at the socially distant markers just outside the gates of Disneyland Park! Inside the Magic’s Editor-in-Chief Bailee Abell showcased an emotional video of walking inside Disneyland Park and taking in the magic on Main Street, U.S.A. Cast Members waved and welcomed everyone back! Take a look at a replay of our livestream below:

Alongside all the Disneyland Cast Members that returned was Ken Potrock, President of the Disneyland Resort! In a Facebook live video, crowds are cheering and screaming in excitement as Bailee shared a walkthrough around the Disneyland Hub and stated:

Hello Everybody, we’re here at the grand reopening day of Disneyland! Were so excited to be here with everybody, there are Cast Members left and right, welcoming us back home, so many of them saying welcome home, everybody’s just thrilled to be hereafter over 400 days.

Disney Fans are back!

The Disney community has become bigger and more important than ever. During this pandemic, many Disney fans bloggers have taken to social media and shared many different ways to enjoy Disney magic while Disneyland Park was shut down. Ideas such as making Disney food at home to visiting Downtown Disney gave Disney fans hope and enjoyment.

Today, many of these influencers — including Maxwell Glick better known as @mrcheezypop — are sharing the happiness on Instagram and welcoming Disney fans back to Disneyland Park. Although you can’t see his smile, his arms are wide open welcome the magic back in his heart as he shares one of Walt’s most influential quotes:

To all who come to this happy place, welcome. The magic is back, and so am I.

Digital Creator Francis Dominic @francisdominiic on Instagram showcases the gorgeous back views of Disneyland’s Sleeping Beauty Castle and jumps for joy over his home park finally opening to California residents! From the look of his Instagram page, the emojis speaks for themselves:

All three of these men have been constantly seen throughout the years visiting many Disney Cast Members in Disneyland and The Walt Disney World Parks showing compassion and care to every single person who has been fortunate to bump into them. Mrs Disnerd shared:

If this Disneyland countdown doesn’t make you want to visit Disneyland soon, I don’t know what will! We at Inside the Magic shared this countdown video right outside the gates and sounds of cheers and happy tears fill the Esplanade

Stay tuned for more Disneyland magic as ITM takes you up close and personal to this magical reopening day! California’s residents who are planning a Disneyland and California Adventure Park adventure can check out Academy Travel for all their Disney planning needs.

Are you celebrating in Disneyland today? Let us know in the comments below if you’re planning on visiting soon!

Comments Off on Disney Guests Share Happiness at Disneyland Park!