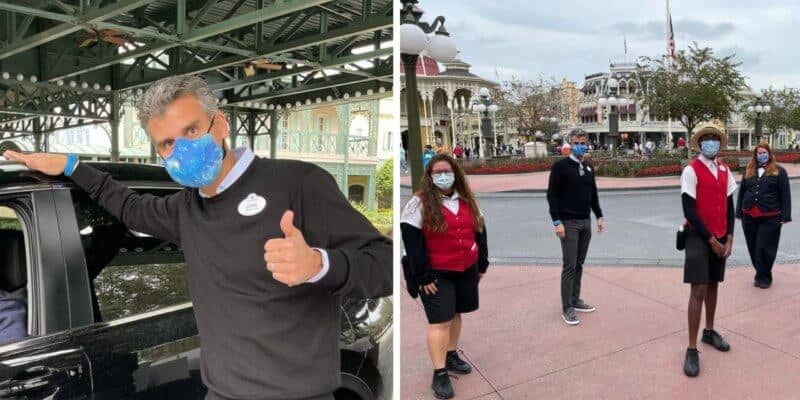 Chairman of Disney Parks, Experiences and Products Josh D’Amaro is always a pleasure to see hanging around the Disney parks, whether it be in Disney World or Disneyland. Today, it seems that D’Amaro wanted to do a little eating and drinking around the world himself, after stopping by Cinderella Castle, of course.

Denise at Mousesteps (@Mousesteps) Tweeted a photo of Josh D’Amaro today at EPCOT. Although I personally would love to believe that Josh was sipping a spicy margarita in the Mexico pavilion and then stuffing his face all over the International Festival of the Arts food booths as I likely would, it seems that Josh was there to have some Guest interaction and talk with Cast Members.

In the below photo, we can see that Josh is locked into a conversation with a Guest on an ECV — but this individual was not the only Guest he spoke with.

A simple Twitter search of Josh D’Amaro quickly showcases his ever-growing fan club of Guests who either met, saw, or went looking for Josh after hearing he was in the parks.

Just bumped into Josh D’Amaro, the Chairman of Disney Parks & Experiences in EPCOT! He works so hard at making our happy place magical!

Eve (@evee_melly13) was also at EPCOT today where she shared her excitement for just seeing Josh at the park.

Just met and spoke with Josh D’amaro and the true future of the Walt Disney company!

Just met and spoke with Josh D’amaro and ??? the true future of the Walt Disney company!

It seems that prior to heading over to EPCOT, D’Amaro started his day off at Cinderella Castle in Magic Kingdom making Guests’ visit all the more magical.

We saw and spoke with Josh D’Amaro this morning at MK. He really seemed sincere speaking with him. When he saw my son meet back with us, he came back over to give him encouragement that the college program will be back at some point.

In terms of the DCP, Disney recently released an official statement saying that they will be bringing the program back. However, there is no more detail aside from that glimmer of hope. Considering Josh was so easily able to give a future Disney College Program applicant positive reinforcement regarding the program, it seems that things are definitely on track for one day (hopefully soon) returning.

We saw and spoke with Josh D’Amaro this morning at MK. He really seemed sincere speaking with him. When he saw my son meet back with us, he came back over to give him encouragement that the college program will be back at some point.

Another Guest, AC (@annaclayr) mentioned that just the sight of D’Amaro brought her joy. It seems like Josh’s superpower is bringing a smile to the faces of Disney Guests everywhere!

I just saw Josh D’Amaro at MK. My day is made.

Most recently, Josh took to Instagram to discuss how he had the best time Park Hopping around Disney World today!

Had a great day today at Walt Disney World … talking to cast and guests and celebrating service anniversaries. #magickingdom #epcot

It seems that Josh’s main goal for the day was just as we predicted — and some! He was visiting both Magic Kingdom and EPCOT to interact with Guests, but also Cast Members who were celebrating service anniversaries. When swiping through his official Instagram photos, we see that memorabilia and congratulatory awards were given out to Cast Members on Disney World property today.

Considering the tens of thousands of Cast Members that the Walt Disney Company recently had to let go, it is nice to see Disney’s high-level executives, such as Josh D’Amaro, always serving as a friendly face for those who are still working at Disney theme parks. As a fellow Guest who has had a chat with Josh at the parks before, it has always seemed he genuinely wants to make sure everyone on Disney World property is having a good time and enjoying the magic.

Have you seen Josh D’Amaro at the Disney Parks in the past? Let us know in the comments below!