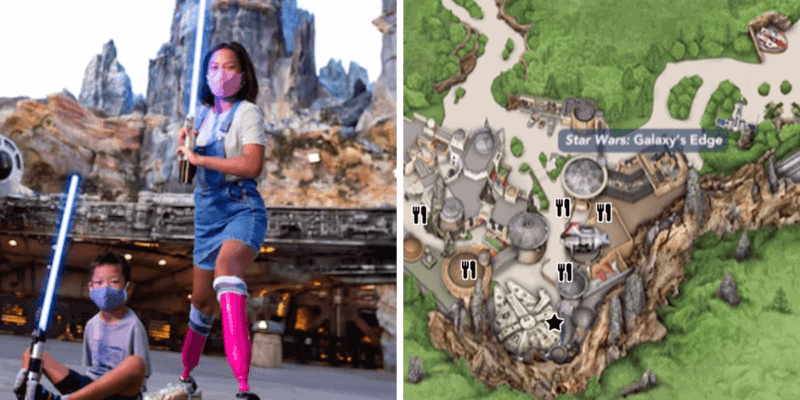 In an effort to become more inclusive and representative of the wide range of Guests who visit Walt Disney World Resort, the Orlando theme park has started to redevelop its theme park maps.

In November 2020, Disney’s Hollywood Studios debuted a new foldable map featuring a same-sex couple leaping towards Mickey’s Runaway Railway ride, which had opened earlier the same year. This new self-help tour guide is a wonderful addition to the collectible paper Disney World maps offered at the Parks. Now, a new edition of Disney’s Hollywood Studios’ map stands at the forefront of representation.

Stopping at the “Crossroads of the World” on Hollywood Boulevard, any Disney’s Hollywood Studios Guest will come across swaths of maps in neatly stacked stanchions as well as being handed out by friendly greeters at the front of the park. While many Disney Guests know their way around the Parks already, Walt Disney World is a global destination with visitors from all over. Many of these first-time and early repeat Guests may need a park map or two (and don’t forget about us map collectors!)

The newest Disney Parks map to hit the stands was added today featuring some cute kiddos in Star Wars: Galaxy’s Edge with Black Spire Outpost looming in the distance. This land has been a big draw to the Park, so it’s a perfect attraction choice for a map cover to lure in more Guests.

The adorable models chosen for this photoshoot are notable because they add a necessary element of inclusion and representation to the maps. Two children with prosthetic limbs wield mighty lightsabers, defending the Millennium Falcon from the First Order.

The kids are also clad in face masks, which mimics the photos used on a recent map addition to Disney’s Animal Kingdom Park.. Both of these maps show Disney Guests in face coverings, which are mandatory to enter a Disney Park at this time.

Not only is the photo of the two children prominently featured on the cover of the 2021 Disney’s Hollywood Studios map, but it is also on the home page for Walt Disney World itself as the main lure to advertise Star Wars: Galaxy’s Edge. It’s about halfway down on the page, among a few other enchanting photos.

As more Disney Parks maps are added to the arsenal of information for 2021, we’re eager to see what other visuals Disney chooses. There is already an EPCOT map for the International Flower and Garden Festival featuring a couple where one of them uses a wheelchair. It’s another great representation of the diversity of the Guests at Walt Disney World Resort.

When you’re ready to plan your Disney World vacation to Walt Disney World, contact the travel professionals at Academy Travel. The Earmarked Diamond staff will share their favorite Disney park map with treasured experiences and guarantee an adventure you’re sure to write home about. You can contact them by calling Academy Travel at 609-978-0740 or by choosing your preferred destination on this page.

Leave us a comment about your favorite land to visit at Disney’s Hollywood Studios!